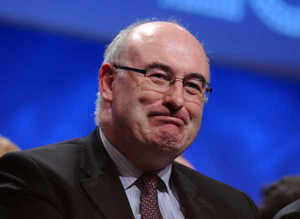 “The Oireachtas Joint Committee on Environment, Culture and Gaeltacht has today, Thursday, 16th May, 2103 asked the Minister for the Environment, Community and Local Government Phil Hogan TD (above) to request all local authorities to provide detailed explanations on why they have not drawn down their allocations for traveller housing.

“Cathaoirleach of the Oireachtas Joint Committee on Environment, Culture and the Gaeltacht Michael McCarthy TD said: “The Committee has proposed to the Minister that in future years, local authorities who do not spend / draw down the monies allocated to them for the provision of housing for members of the Travelling Community should be required by Regulation to give a detailed explanation of why they have not done so.

These local authorities should be required to outline what steps they have taken in attempting to provide housing to members of the Travelling Community, how and why these steps have failed, what plans they have to correct the situation and to provide the housing required and the timeframe within which they intend to provide this housing.”

Why Phil Hogan Is Misunderstood

On Tuesday, the  Oireachtas Joint Committee on Environment, Culture and Gaeltacht heard from several representatives of the Travelling community.

Lorraine McMahon who, as co-ordinator of Ballyfermot Traveller action project, spoke on behalf of the Traveller representatives on Dublin City Council Local Traveller Consultative Committee. She asserted that there was a non-drawdown of funding or underspend of more than €12 million within Dublin City Council from 2007 to 2012.

Catherine Joyce, who works in Fingal County Council, told the committee more than €7.5 million has been handed back by Fingal County Council, even though the local authority is home to one of the largest temporary halting sites, St Mary’s in Cappagh field. Ms Joyce told the committee families who reside at the site have no access to electricity, proper sanitation or rubbish collection services. She also said some families have been living there for 15 years, waiting for mainstream housing or Traveller-specific accommodation.

“Travellers such as the MacDonald family in Dunskink Lane have been on the accommodation list for the past ten years. The local authority has committed to providing accommodation for them yet they have not got basic accommodation ten years down the line. They live on a site with no electricity, portable toilets and no proper sanitation and I cannot understand why the local authority, whatever way they dress it up, is sending back over €7 million or not drawing it down from the State budget and at the same time this family is in dire need of accommodation.”

Chrissie O’Sullivan, from the Traveller Visibility Group Cork, asked the committee why there was a €6million underspend in the Cork area.

“If one simply adds Fingal County Council’s yearly allocation, dating from 2007 to 2012, it would amount to €14.25 million. Then if one subtracts the drawn down sum of €6.6 million for the same period it would look like we had not spent €7.65 million. That is simply not true. Many of these schemes were in the programme year on year. For example, planning permission may not have been granted or a scheme could be tendered for successive years yet the Department continued its commitment. The Department’s adherence to its commitment made the county council look like it had not spent the money. That is simply not the case.”

Would YOU Live Next Door To This Man?