Great turn out for the @TravellersMH protest at the Dáil. Promises were made to the travelling community and broken repeatedly. It’s time they were kept. pic.twitter.com/fABLvVwdGW

Bundoran councillor, Michael McMahon, has launched a stinging attack on the group of members of the travelling community who have arrived in the town in recent days from outside the area. He says it’s a flagrant breach of the Covid 19 restrictions in place and the matter needs to be dealt with by the authorities.

Bundoran  received the first group of Ukrainian refugees, who arrived in the seaside resort….The first busload of what are expected to be about 60 refugees arrived in rainy conditions and are staying at a number of different premises.

County councillor Michael McMahon who was one of the first people to greet the arrivals said that it was a sad situation to be offering the hand of friendship in such trying circumstances. But he was glad that the town had reached out to help those in need.

Where are the overnight modular homes for 10k homeless people?

Govt to build houses overnight for Ukranians, who like the homessless here have nothing! #HousingCrisis pic.twitter.com/xsASrhf6sR 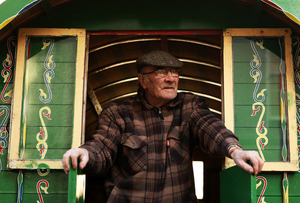 Members of the Travelling community gathered outside Leinster House to mark International Human Rights Day, and to hand in a petition to  Taoiseach Micheál Martin to take ‘immediate action to address the mental health crisis being experienced by the Traveller community and the denial of Human rights and Institutionalised racism’.

From top: Jimmy Keenan, who lost his wife Bridget to cancer in 2019 and his son Jim at the age of 23 in 2020 to suicide; National Traveller Mental Health Network chairperson Geraldine McDonnell (left) and Acting Chair Maggie McDonagh; Paddy James Collins from Finglas in his own hand-crafted wagon; Members of the travelling community, including singer David Keenan from Ennis and speaker Thomas McCann from the Traveller Counselling Service; A crucifix and momento of Jimmy’s wife and son; Paddy James outside Leinster House.

Further to the withdrawal of an offer to head the Shannon Group from Aaron Forde when details of his comment on social media were raised with Transport Minister Eamon Ryan….

In response to a tweet about the legal basis of public service cards, Mr Forde wrote: “Do the kn***ers who are collecting multiple SW [social welfare] payments have one.”

Mr Forde described the Green Party on Twitter as “clueless about agriculture, climate and lots of other issues”. When contacted he said he has “views on climate” as someone who spent their “life in agriculture” but added: “I wouldn’t say anyone is useless.”

In another post last summer he said Tánaiste Leo Varadkar is a “narcissist” and also called him “Leo the Leak” on at least two occasions.

In response to a tweet about members of the Traveller community seeking stables for horses on social housing developments, Mr Forde wrote: (sic) “Kn****red have the country robbed.”

In another tweet responding to a news article about the Traveller community, he wrote: “Plenty of interaction with them stealing, intimidating illegal parking etc.”

Join genealogist Tony Hennessy M.A.G.I. and Michael Collins of @PaveePoint for ‘Rolling back the Road: A Journey in Irish #Traveller Family History’ an online talking taking place on Monday, 7 December at 7pm.

Rolling back the Road: A Journey in Irish Traveller Family History (National Library of Ireland)

Great community celebration Labre Park Ballyfermot tonight to welcome home our first ever Traveller Woman Senator ⁦@Love1solidarity⁩ Eileen Flynn and no doubt she will shake things up – C’mon Eileen ⁦@pb4p⁩ And she can stay on side of my van too pic.twitter.com/OOZ5Tnl5fU

Although nominated by The Green Party, Eillen Flynn is the only independent candidate among the Taoiseach’s 11 nominees to the Seanad.

Speech and story in here: ‘I am overwhelmed and humbled’: Hazel Chu elected Mayor of Dublin City #iestaff https://t.co/tgPISOpb6F via @aoifegracemoore

James O’Reilly was jailed for 20 years for the repeated rape and sexual abuse of his seven daughters – pictured outside the Central Criminal Court this morning (above) – and a younger sister over a 23-year period.

Afterwards, [O’Reilly’s] daughters urged other victims of abuse, particularly those in the travelling community, to speak up, come forward and report abuse.

They also asked where was the protection from the State authorities when they were defenceless, vulnerable children forced to live on the fringes of Irish society.

They questioned if this would have been allowed to continue for so long if it had been a respected settled family in Ireland.

I’m working with the women in the Mayo Traveller Support Group on a project called Crown- Hair & Identity in Traveller Culture. It’s an exploration of the customs, identity and adornment of hair in the culture. I put this video together with photographs from the project for Traveller Pride Week. 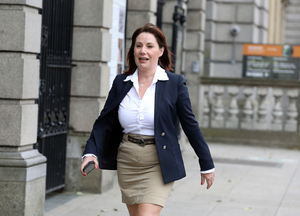 NEW: Dáil set to hold a minute’s silence at noon today for those impacted by racism internationally.

Dáil also due to hold a debate on racism next week

My restored and colourised 1954 of a beautifully decorated caravan en route to the Cahirmee Horse Fair at Buttevant, County Cork.