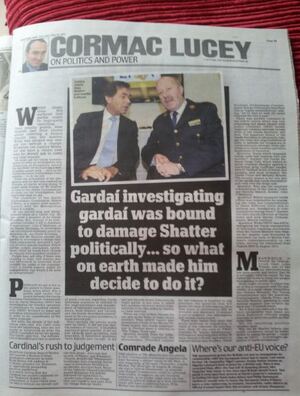 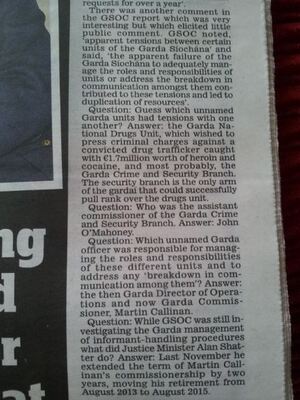 Cormac Lucey raises a few questions and proffers some answers in today’s Irish Daily Mail, in relation to the role of Justice Minister Alan Shatter, Commissioner Martin Callinan, and Assistant Commissioner John O’Mahoney (who incidentally carried out the penalty points report) into the investigation of the Kieran Boylan affair.

Audrey Carville: “What questions, or were any questions raised as a result of what Martin Callinan said [at the Public Accounts Committee hearing] today?”

John Mooney: “Well, Martin Callinan was asked specifically was he himself investigated as part of this, in terms of his knowledge. He gave a wishy washy answer about that. He kind of admitted that he had a secondary or sort of supervisory role over this. I think Garda management were utterly convinced that this had been put to bed last week, after the Garda Ombudsman came and published its report, which said that the cooperation had been, you know, unsatisfactory. They were using highly diplomatic language. They couldn’t say they were blocked or hindered in their inquiry because they couldn’t put themselves in the mindset of the Garda Commissioner, who was in charge of the disclosure of all relevant information in relation to this. So I think Martin Callinan now probably realises that there is a serious problem surrounding this and it’s not gonna go away. You know there are now plans to bring him before another Oireachtas committee that handles Ombudsman issues. I think there are ca…there is certainly one case now under way to go to the Court of Criminal Appeal, that, when the details of this emerge into the public domain, I think Martin Callinan is going to have even more problems.”

Carville: “But you heard him there, John, I mean his hands are tied in what he can say.”

Mooney: “That is quite simply not true. The problem with this is…and if you don’t…we were involved investigating this since 2005 and 2006. And we’ve amassed a certain amount of information on what precisely happened and about various altercations with the Gardaí who were involved with Kieran Boylan and Kieran Boylan himself. The fact of the matter is Kieran Boylan is the top drug trafficker, he was operating across Europe. He was a target of the European police forces, including the guards and Irish Customs. They had active operations trying to stop him. He colluded with about six or seven detectives, in terms that he would set up drug deals and arrests for them, usually of low-level dealers or in some cases it was people who he owed money to or they owned money to him. And that went on swimmingly and the arrangement worked perfectly in terms of the career advancement of those involved, until a group of pests in the Garda National Drugs Unit landed him with €1.8million worth of heroin and cocaine and at that point he started threatening to reveal all. I know all about this, I’ve been sort of very much involved in this investigation. It was actually the Sunday Times inquiries which forced GSOC to commence its public interest inquiry because it was getting so out of hand. I mean this is a drug trafficker who’s given a haulage licence by the Government. He had his passport changed…”

Carville: “Which was later revoked.”

Mooney: “Exactly, after we published it though. And he was also…changed his name into an Irish passport, again. That happened. There were all sorts of issues with witness intimidation, people who were assisting the Sunday Times had the most incredible intimidation levied upon them and the guards I can tell you now were nowhere to be seen in all of this. Indeed, I was threatened myself at this stage and we published it in the paper and not, no-one would even contact us in relation to that. So that’s what happened. The problem for Garda management’s point of view is rather than deal with the individuals involved here, the Gardaí who actually caught Kieran Boylan were transferred from there positions for pursuing him, by refusing to acquiesce in the dropping of charges against him, and they ended up in the situation where some of the people who were actually involved with this guy, who are, the focus of that report by the Garda Ombudsman which I should add is with Alan Shatter at the moment, were actually promoted, after these allegations emerged into the public domain. Not alone were they promoted, they were also wheeled out to certain media organisations who used to sort of praise, heap praise upon them for their amazing ability to seize drugs.”

Carville: “Gerry O’Carroll, former detective garda superintendent, what do you make of this issue that was discussed today. I mean it sounds, from what John Mooney is saying, extremely serious for the Gardaí.”

Gerry O’Carroll: “Yeah, the Kieran Boylan saga, nobody knows it better than John Mooney in the Times, Sunday Times, which exposed it to begin with. It’s an extremely murky, it’s a snake pit. There’s no, there’ll be no real winners in this one. Kieran Boylan, as John pointed out, is a notorious drug trafficker. There’s no question in my mind, even though I would not be au fait with, since I’m now retired 10 years. But through the grapevine and on the ground ex-colleagues of mine is that dealings were done, not very savoury but then it’s not a very savoury business. As I said, it’s a snake pit. You’re dealing with the lowest of the low. You’re dealing with the most cunning, mischievous, devious, evil people who’ve made a fortune selling these drugs all over the country, making millions out of it. They’ll stop at nothing. They’re utterly amoral and the police who have to deal with it…I remember one time reading a book by a headhunter called Douglas who, in the SCI, pursued serial killers. And he used the most chilling, he said you know ‘when you really look into the mind of these people, take care it doesn’t look back at you’. And the trouble is when you’re dealing…and it’s essential, it’s grist to the mill, it’s the ground stone of police work, the keystone of informants but there are huge dangers involved to the police.”

Mooney: “I just think it’s really important to point out this is not about civilian oversight or political oversight or anything else. These were a group of detectives operating on their own, in a charmed relationship with a drug trafficker. No one knew about this. It only became an issue when the good work of the Garda National Drugs Unit uncovered what was going on and this fella started issuing threats, one whilst in custody. If police officers, for example in Northern Ireland or Britain, engaged in this type of activity, they’d be charged with corruption. They run these trials in the UK, they’re very difficult to secure convictions against. They run them in America, they run them in Australia and everywhere else. And the police officers who step outside the line, in terms of their dealings with criminals are prosecuted for corruption and collusion and other offences.

The DPP decided not to run, there was a lot of erroneous reporting in relation to this matter by faithful elements of the media last week which stated that these officers were exonerated. These officers were not exonerated whatsoever. There was a mobile phone found in Kieran Boylan’s cell when he was in custody for a short period which was traced back to one of the individuals involved in this. But the overriding problem with this was the State had paid this individual to traffick drugs, or should I say, an element of the State which was in these guards, had been paying this individual, who’s already a multi-million drugs trafficker, giving him sweeteners to arrange importations and the arrests of people, some of whom were young men who developed addictions to drugs and Boylan himself had actually instructed them to collect drugs. And then guards waiting in the area to arrest them, as soon as he provided them. And, you know, it’s very important, this isn’t about oversight of the law. This is a group of guards who managed to get away with this because of whom they’re connected to in the force. And that’s what this is all actually about.”

John Devitt: “I would, I would, I agree with most of what John has said but there doesn’t appear to be any mechanism or system in place to provide for the regular, the regular checks that should be in place, an oversight that should be there, of this kind of Gardaí who are involved in these roles or involved in dealing with informants. In spite of the recommendations in the Morris Tribunal, there hasn’t been an internal anti-corruption unit established within the Gardaí as there is in other police services. This case emerged almost by accident because officers in the National Drugs Unit and The Sunday Times exposed it. We need a much more systemic approach to tackling these problems.”

Mooney: “Martin Callinan never said there was no regulations breached, what he said was it wasn’t legislated for them to breach regulations. The regulations were breached. Kieran Boylan couldn’t have been an informant because he was the instigator of crime. I know all about this. And again, there’s nothing wrong with informants. I’ve done a lot of work on terrorist organisations and organised crime. I’ve came across all kinds of information on secret roles being played by people in the IRA and whatever. We don’t go near those sorts of stories. I would never think of even suggesting or disclosing the identities of someone involved in that type of work because there are Gardaí dealing with that and they’re very professional and they’re doing heroic work and they’re doing excellent work. And the PSNI as well. But this guy isn’t an informant. This fella, there’s a label being attached to him, because no one wants to really look at the scenario whereby you have a group of detectives effectively in a cosy arrangement with a drug trafficker. And again there are people sitting in prisons tonight, in the Dublin area, I know one man, Andrew Kearns is his name, he was sentenced to ten years after being coerced into collecting four kilos of cocaine by Kieran Boylan, who subsequently actually asked him for money prior to this transaction and was arrested within an hour of arriving and collecting these drugs for him. Again, you know, look at, what is the benefit of locking up someone who has developed a drug addiction while the drug trafficker goes free, having been monitored by guards handing over a quantity of drugs? I mean this stuff is just rotten to the core.”

Previously: Anything You Say Will Be Taken Down