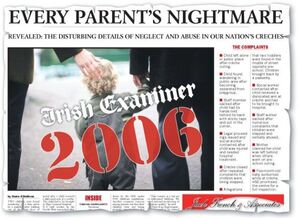 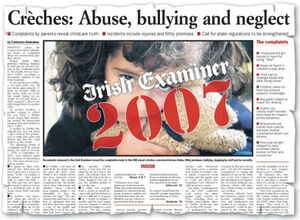 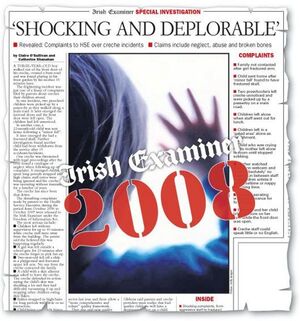 The Irish Examiner‘s exposure of creche childcare services in Ireland since 2006.

There was an avalanche of promises and commitments from ministers and the HSE in 2007, but as this week’s Prime Time showed, nothing has changed.
Childcare in this country is still of dismally low quality, yet services are obscenely overpriced while staff are woefully underpaid and undertrained and the regulatory framework has fewer teeth than a four-month-old.
Breaches revealed by inspections are repeatedly ignored, creches aren’t named and shamed, and little more than a handful of owners ever end up in the courts — and then fines are derisory. Under the Child Care Act, a breach leads to a €1,270 fine.
Despite the clamour five, six, and seven years ago, inspections still aren’t unannounced but are pre-planned, giving managers ample time to deep clean the premises, stock up on toys, ensure a full complement of beaming staff and all documents are up to date.
Contrast this with food hygiene inspections, where teams arrive unannounced and can shut down the premises in 24 hours.

Another creche scandal … but we’ve been here many times before (Claire O’Sullivan, Irish Examiner)