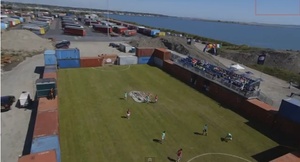 We may recall last week’s preparations at Eastpoint Business Park?

Well, Westmeath beat off {sides from] eight other counties to win the first Red Bull Cúl 5…

…a pop-up five-a-side tournament using “an adapted version of the game” and played inside a specially built 50 x 30m pitch.

Finally got our video up on YouTube. Hope you would be willing to share it. Its a cool project. We are trying to get a five-a-side gaelic football game going in Ireland. It is something that could be played anywhere, in any part of the country. The hope is to keep people playing GAA. We also turned an urban waste land into a pretty cool pitch.