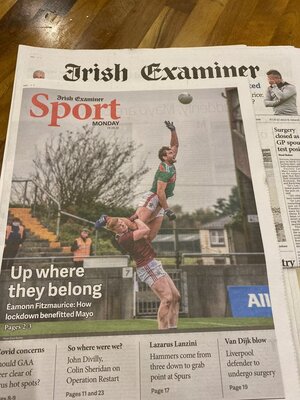 Well I kinda had to buy the @Independent_ie and @irishexaminer this morning – just to see it 😀 #sportsphotography #mayogaa #gaa #AllianzLeagues pic.twitter.com/m2oue53iZG 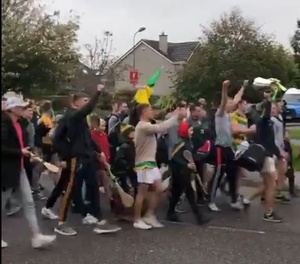 Marty Morrissey told RTÉ’s News At One that all GAA club games at all levels have been suspended with immediate effect and until further notice.

“The decision has been taken in the interest of public safety. A number of incidents have been brought to our attention in recent days, in particular, post-match celebrations and a lack of social distancing at certain events have proved disappointing and problematic.”

“This directive applies to all ages, all grades across the island. Club, social centres, bars are also to close. Training will continue to be permitted as per the guidelines, outlined for the relevant levels and the Government’s National Framework for Living With Covid-19…” A short comedy animation from Just The Tipp, who write:

Local man and GAA enthusiast, Joe Nelligan has dedicated over 30 years of his life to training the youth of the parish in the ways of the GAA. When his under 12s team emerges victorious in the little league county final, Joe’s lifetime of dedication has paid off, or so it would seem. The lads in Ryan’s discuss!

All sporting events will take place behind closed doors, under measures being discussed by cabinet this afternoon.

RTÉ News understands that a decision has been made not to allow spectators at sporting fixtures. From top: railings at the Jellicoe Avenue entrance of Grove Park in north Belfast; Colm Dore

Among the statues of supremacists which have fallen in recent days, that of King Leopold of Belgium points to the lie that people in the past didn’t understand supremacism.

Roger Casement became famous for his exposure of injustice in colonial Congo under Leopold. He also lived the maxim that all politics is local, as his concern for justice fed his interest in Irish culture as it, too, struggled to emerge from a long history of colonial subordination.

The GAA’s promotion of Irish sports was part of that emergence. Casement was one of the organisers of the inaugural Feis na Gleann in his home place, County Antrim,

in 1904. A tenant farmer offered to host the playing of Gaelic games but this angered his Unionist landlord whose threats meant that the only available field was overgrown with weeds. There is a metaphor-ready photograph of Casement taking a scythe to it in order to enable its use.

The statue protests articulate the view that there has been, and remains, a denial of power relations: a denial of present-day disparity and its historical roots. To borrow an expression from James Baldwin – a failure to corroborate the reality people are living.

June 15 saw the display of an exclusionary, supremacist, banner and graffiti at Belfast City Council’s Grove park in north Belfast. They threatened users of the public park who might be identified with Irish sports.

This was a crude expression of an ugly reality which is both denied and enabled by mainstream discourse which perpetuates the very disparity which prompted the creation of the GAA in the first place.

This is the disparity which treats Irish culture as though it doesn’t belong in the north-east of Ireland. It’s the politics which deems the visibility of the indigenous language to be “divisive” there. Like an iceberg, this politics is visible to some extent, but below the surface to a large extent.

It’s uninterrogated in the framing of discussions which accept – as a starting premise – that the political acceptability of inclusivity in the north (e.g. bilingual signage to include the indigenous language) has to be looked at by presenting “both sides”.

Inclusion and rejection of inclusion are presented as equivalent positions, with the purportedly neutral position favouring the status quo by “not taking sides”.

Angela Davis has said that neutrality on disparity is siding with disparity. That presents a challenge for purported centrists in the north who (with the support of Dublin establishment parties) stand to benefit from “both sides” false equivalence.

Discourse in the north-east has these characteristics because it wasn’t arrived at in a vacuum. It’s a product of unequal, historically-rooted, power relations.

The embedded longevity of that culture was such that BBCNI didn’t broadcast any GAA on television until the ‘90s, even though Ulster championship matches routinely attracted attendances larger than the populations of County towns like Omagh, Armagh, and Enniskillen.

BBCNI has never broadcast a camogie or hurling match. These cannot be dismissed as matters of broadcasting rights.

In 2018, that station’s drivetime radio programme featured an extended discussion of what winning the Superbowl meant to the people of Philadelphia. It has never had such a discussion about what reaching the hurling summit has meant in Galway and Limerick. Such discussions don’t require broadcasting rights.

In the north, the historically dominant traditions main daily newspaper continually gives credence to Unionist “concerns” about University students wearing GAA tops in lecture theatres. What politics does that feed?

Meanwhile, there are calls for leadership, for conspicuous opposition to the sort of supremacist hatred that catapulted Holy Cross primary school girls into global consciousness twenty years ago.

Even in that case, the existence of supremacism was equivocated about by respectable voices in Ireland, north and south, while instantly recognised by global audiences who saw powerful resonance with the ordeal of little Ruby Bridges in 1960s New Orleans.

This, too, points to a challenge for centrists who decry “our local squabble”, yet simultaneously reduce it to a mere provincial matter by refusing to characterise it in terms with which they would immediately characterise expressions of supremacist exclusion abroad.

The problem that Casement had, the problem cultivated under the old Stormont regime, still stands. Denial of its existence makes it difficult to address.

Colm Dore is a Belfast-based political commentator who has appeared on BBCNI radio and television programmes. Follow Colm on Twitter: @ColmDore Laochra Gael [Heroes of the Gaels) on TG4.

Diarmuid “Gizzy” Lyng was captain and leader of a Wexford team that performed heroics in their efforts to overcome Kilkenny, the greatest team of all time.

Then, at the height of his powers, he was struck down by a mysterious illness. He was forced to give up hurling and it seemed that life was falling apart.

Diarmuid travelled the world in search of physical and mental recovery. And it was in West Kerry, a place close to his heart that he finally found release. ‘Cluxton gets the ball and taps on his toe,
Gives out to Cooper and away he’s goes,
Gives it on to Fenton right on the nose,
Fenton gets fouled but the ref doesn’t blow
He sees Johnny Small sneaking up on the right
Johnny sticks it o’er the bar to every Dubs delight’

How ya doing folks, above is song I wrote (re: Dublin football team). Don’t know if you do this type of thing but just thought I’d send on for the craic in the hope that it might peak an interest among your readers for Saturday’s All Ireland Football replay…

On the Saturday Game Live on RTÉ2 and RTÉ Player (5.00pm) Joanne Cantwell will be joined by Pat Spillane, Ciaran Whelan and Stephen Rochford with Ger Canning and Kevin McStay on commentary.

Jacqui Hurley and Darren Frehill on Saturday Sport on RTÉ Radio 1 will be alongside Alan Brogan, Conor McManus and Colm Cooper with Darragh Maloney joined by Oisín McConville on commentary.

On Saturday evening (10.00pm) the Saturday Game will see Des Cahill and guests Colm O’Rourke, Sean Cavanagh and Tomás Ó Sé look back at the afternoon’s action while Marty Morrissey will be at the winners’ hotel. The programme will also feature the football team of the year announcement.