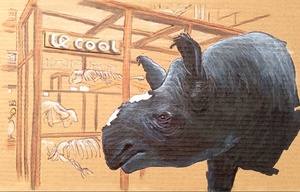 The hornless rhinoceros head from the Natural History Museum, Dublin.

On some manner of cardboard box ‘flap’.

By Nicky Hooper, who writes:

So I went to one of my favourite places in Dublin – the Natural History Museum – and had forgotten that the rhino had his horns removed as a precaution against theft. They are making replicas, however in the meantime, they have pretty much ripped them off his head, so he looks a bit brutalised and pretty sad, poor rhino – I think I need to knit him a hat…Hopefully they [the museum] will get funding one of these days so that the upper two floors will be accessible again.