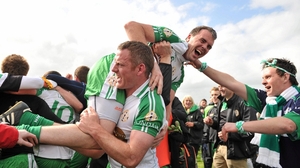 Members of London GAA club after progressing to their first ever Connacht Football Championship final.

They will play Mayo on July 21.

This is truly historic and, away from the buffonery of inviting the Queen to throw in the ball, gives Ireland a genuine chance to connect to its emigrant population, many of which came from the West.

Firstly, the Connacht Council should get on the phone to the London Board and find a stadium to host the Connacht Final. They have three weeks, which is loads of time to cut a deal with one of the twenty stadia in London that have capacities of more than 10,000.

This wouldn’t be cheap, of course, but in this year of The Gathering it would be interesting to see if the Government is willing to put its money where its mouth is and underwrite the operation.

…Why go to the trouble? Because we, the nation, owe the Irish in London. We owe them big-style down the years and now that a unique opportunity has arisen, where an English team is playing a high-profile match in the most Irish of entities, the All-Ireland Championship, that gives us an opportunity to celebrate, remember and look forward.

This is a chance for a second Polo Grounds [GAA ground in Upper Manhattan], and if it’s not grabbed it will be gone. But it’ll be bigger than the Polo Grounds in its way, because the Irish were always welcome in America. They were not always welcome in England – no blacks, no Irishmen, no dogs, as the signs often said.

Banksy Versus The Olympic Censors