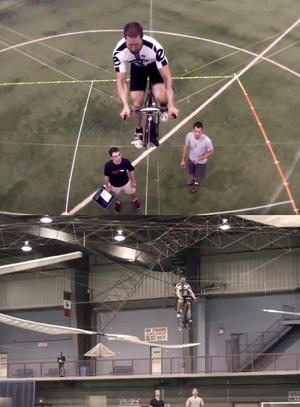 The $250,000 Igor I. Sikorsky Human Powered Helicopter Competition, which has been contested unsuccessfully by all manner of chopper boffins since 1980, has been won  by the first human-powered helicopter to fulfill all three of the American Helicopter Association’s criteria, namely: a flight lasting at least 60 seconds, rising at least once to a height of 3m while maintaining its centre-point inside a 10m square.

Last month, the AeroVelo team from the University of Toronto hovered their Atlas pedal-powered quadrotor (which measures a massive 47m across but only weighs 54kg) for 64.1 seconds and reached a maximum height of 3.3 meters.