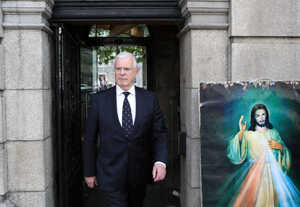 The phone lines in the office of Fine Gael TD Peter Mathews have been disconnected as the party makes efforts to move him to new accommodation. Mr Mathews is not satisfied with the new office space on offer and also doesn’t want to move.

…He said he is still based in the office but his “phone lines have been disconnected”. “I am attempting to resolve the matter,” he said. Mr Mathews said he is dealing with the relevant authorities about his move. “I’ll deal with everybody right to the top,” he said.

Previously: It Wrote Itself