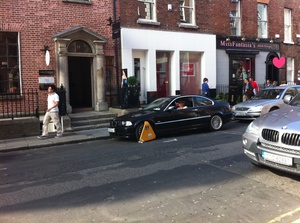 Nobody likes a grass.

There was a free space in front of the silver Merc which the (now clamped) BMW reversed into, bumping into the Merc in the process. Once done the parked car in front of her decided to leave their space, but not before the BMW driver honked her horn angrily to warn them not to hit their car. That was a bit hypocritical.Then the BMW decided to move forward to cover both spaces to ensure nobody else would park near her.

This was too much.

I passed a clamper around the corner and politely told them that they’d make my day if they clamped this BMW which was around the corner. An hour later I took the snap (above). Justice done? I’d like to think so.

Bean-spilling Samaritan or snivelling tout in need of a washroom shank?