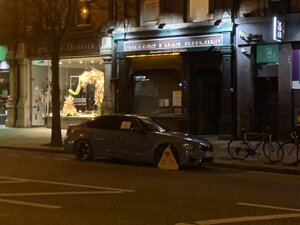 Via Ireland Away, who writes: 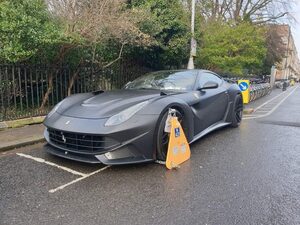 I left a tenner under the windscreen wiper towards the fee to get it unclamped.

Clearly a man with a massive wallet. It’s the little things that brighten my day.

Name that Ferrari (and how much), anyone? Mespil Road, Dublin 4 – the worst place for clamping in Dublin

You Mespil with the best.

But the clamping calamity seems to happen all too often, especially on Mespil Road, Dublin – named in the report as the worst place for clamping in the city as 416 cars were clamped there between January and June.

Ranelagh isn’t far behind either, a new addition to the list. In the first half of this year, 320 cars have been clamped compared to just 35 during the same period last year. According to the report, the increase in clamping in the area was due to people parking on a clearway.

The worst places for clamping in Dublin revealed (RTÉ) GoCars can park for free on any Dublin City on-street Pay & Display.

Does Dublin City Council have the ‘power’ to clamp?