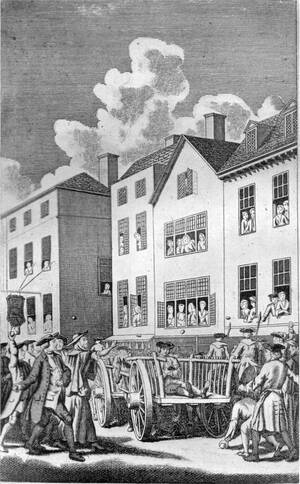 (Supergrass ‘Gallows Paul’, the last man to be “publicly’ castrated in Dublin).

Keep this to yourself.

We’ve been snitching on our MATES  for years.

Following on from your Clamper Snout post yesterday, I thought your readers might be interested to know that ‘private thief-taking’ in Dublin has a long and dishonourable history, dating back to the 18th century, when many criminals found it more profitable to turn policeman for reward than to continue with their life of crime.

Sadly, informing was a risky business, as shown by the story of Dublin’s most famous thief-taker, Paul Farrell (‘Gallows Paul’). While on his way to prison for corruption in 1734 Farrell was removed from his cart by the notorious Kevin Street Mob, who sliced off one of his testicles, cut out his underlip and hacked him in several parts of his body before hanging him on a tree in the Liberties where he was found a day and a half later, dead.

Farrell was not the first man to be publicly castrated in Dublin, but he may well have been the last; I haven’t found evidence of any subsequent cases. All this happened very close to the scene of your post. A warning to contemporary clamper informers, perhaps?

Previously: Why I Became An Informer For The Clampers