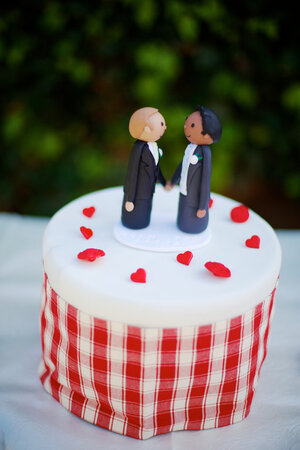 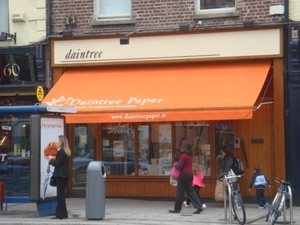 (Nicola Hyland, centre and one of her same-sex wedding cake toppers, top. banned by Daintree Paper, above.)

Recently, we received two letters complaining about homophobic discrimination at Daintree Paper [wedding stationers] on Dublin’s Camden Street. This is what transpired…

I make hand crafted, personalised, clay cake toppers and I was invited by Daintree Paper on Camden St., Dublin to become part of their ‘Wedding Hub’ in May this year. The idea behind The Wedding Hub is a space where brides and grooms can visit and view the stalls of potential wedding suppliers.
One of the toppers in my stand depicts two clay grooms holding hands. After about a week of my stand being in the store I got a call from the owner saying he would like a word next time I am in. He had removed the same-sex couple topper from my stand without my permission because it was in conflict with his religious beliefs and although he is happy for people from the LGBT community to shop in his store, he is not comfortable with promoting same-sex marriage on the shelves.
This was pretty shocking to hear. I told him that what he did was not in line with my own beliefs, and indeed that I wasn’t happy with him removing stock without my consent, and that I could not in good conscience remain in The Wedding Hub if he refused to place the topper back where it was. After a lengthy conversation, during which it was pretty obvious he wasn’t going to change his mind, I left and removed my stand from the shop a couple of weeks later.
This incident has been all at once shocking, upsetting and anger-inducing. I had been of the belief that this kind of attitude was all but gone, but I was very sadly mistaken. I would like to add that in the weeks following this incident I have spoken to a number of staff members in The Wedding Hub and Daintree Paper, none of whom share the opinion of the owner.
Yours,
Nicola Hyland

Dear Editor,
Thank you for allowing me the right to reply to Nicola’s letter. Daintree does not stock any merchandise that promotes same-sex marriage.
Daintree has a subsidiary company called The Jesse Box, which is a program for teachers and parents to pass Christian faith to children through re-enacting bible stories in a diorama.
There is an obvious conflict here that prompted the action as outlined in the letter from Nicola Hyland.
Yours sincerely
Paul Barnes, Daintree Ltd