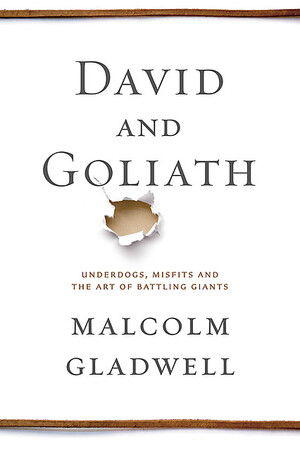 Earlier  we asked you to name YOUR pluckiest underdog moment with a pair of tickets to see ‘controversial’ author Malcolm Gladwell LIVE going to the most impressive struggle.

Damien Regan: “My greatest David & Goliath story involved me in an altercation with two muggers with knives demanding my phone, I knew they wouldn’t want it, so I told them calmly ‘You don’t want my phone’. They grew more threatening about wanting it and aggressive with their knifeplay until eventually, from my pocket, I pulled out a Nokia 3510. They just walked away.”

Derp: “My greatest David v Goliath story was taking on property developers who were trying to knock down my family home to build a block of apartments, and suing them in the High Court aged 23. If I had lost – bankruptcy. If I won (and I did) developers went wallop. House stands to this day, with family living in it happily. Developers…not so much…”

Rory Walsh: “My greatest David Vs Goliath story Involved me taking on my Mother’s colossal technophobia whilst teaching her to ‘surf the web’ and winning. And it only cost me 3 years, 7849 fag breaks, and a permanent facial tic. She still can’t remember her password though.”

Medium Sized C: “My greatest David vs. Goliath moment involved me postulating laws of human behavior based on faux-facts I pulled from my arse and then writing books about them with really plain covers, a single small graphic and infuriatingly long sub-titles.”

David: “My greatest David Vs Goliath story Involved me taking on my teacher and winning. I hated school. I hated school with a passion. One Monday morning I turned up to school with out my school bag. The teacher wasn’t happy. I couldnt remember where I left it. I turned up Tuesday, Wednesday, Thursday and Friday without it too. The teacher began to mock me in front of the class by Wednesday.
On Friday a gigantic Garda walked in to the class room, he looked gigantic to me at the time, and asked is there a ‘David Smyth’ in the class. I said “Yes, that’s me” from the back of the class where I was sitting (hiding). He said we found your school bag and all your books scattered around Mountjoy Square, and we only had time to bring them to you today. THAT put the teacher in his place! I was innocent and the Garda had come to the rescue!! Take that a-hole Goliath!!!
[The backstory was I had an accident over the weekend before this happened, and had amnesia and lost six months of my memory. I was lucky I remembered by name. We had a banger of a car, and my mother wondered why someone had broken one of the windows when I was in hospital (the children;s hospital near Mountjoy Square), and not stolen anything. Turns out they stole my school bag. My parents didn’t believe in taking days off school, so I was back into school on Monday morning. That’s my best memory of primary school. I hated every single day.]”

Malcolm Gladwell at the RDS (Ticketmaster)