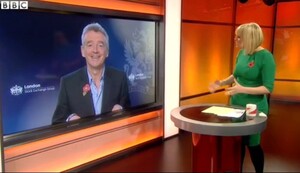 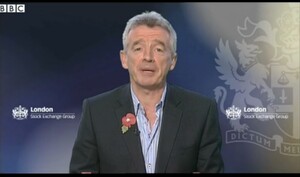 Further to this morning’s profit warning/share price drop at Ryanair.

A hyper Michael O Leary appeared (from the London Stock Exchange) on BBC’s Breakfast Time (with business reporter Steph McGovern) to demand that the airline’s business is “booming” and that it is a victim of misreporting in the UK press.

Steph McGovern: “It’s fair to say that Ryanair have a bit of a bad reputation when it comes to customer service, so much so that it was voted the worst of Britain’s One Hundred Biggest Brands by readers of ‘Which’ magazine. And this morning, Europe’s largest airline has announced that it’s slashing its four year profit forecast because of increased competition and rising fuel costs. Well, let’s talk now to Ryanair Chief Executive Michael O’Leary. Good morning to you Michael.”

Michael O’Leary: “Hi Steph, how are you?”

McGovern: “I’m very well thanks. What’s gone wrong with the company, because it doesn’t look great?”

O’Leary: “Absolutely nothing! Traffic is up, we’re booming, profits will be down, solely because prices this Winter will be weaker. In periods of weaker prices, Ryanair leads even more. We have great customer service , which is why 81 million passengers choose to fly with us.

McGovern: “Great customer service, Michael? You’ve admitted yourself that you can be a bit abrupt and that you’re having to change things. Your shareholders have been asking you whether you think that the problem is because of customer service and you even admit yourself, you’re happy to take responsibility for that.”

O’Leary: “Sorry Steph, what I mean is that our web-site is poor, we’re going to transform that web-site in the next couple of weeks, other than that, our customer service is brilliant! We have the lowest fares, we have the most on-time flights, we have rising load factors and last Friday we announced our October traffic was up 6%.”

McGovern: “Sorry for interrupting, but you’ve put out a profit warning for the first time in a decade recently. Also, you’re saying you’re going to change all the charges, you’re , to reduce your baggage charges. You’re now going to have allocated seating, you’re admitting that all of these charges that you did, even one time you were looking at charging for use of the toilet and you’re admitting now that those were daft ideas, and that’s not what makes customers happy?”

O’Leary: “Look, what makes customers happy, again which is why 81 million people choose Ryanair, low fares, great on-time flights, great service. Despite the fact we have a poor web-site, 81 million people this year will still fly with us, compared to less than 30 million people flying with British Airways. That’s not to say there aren’t aspects of our service that we can improve. The big one, I think will be the allocation seating, which will come in on the 1st of February, next year. Passengers can now bring a second bag on board our flights. It’s not because there’s anything wrong with our business, our business has never been better. I love periods when prices are low, because we do better in periods of low pricing. We have the lowest costs and our costs continue to fall.”

McGovern: “Are prices going to have to go up, if you’re going to cut back on some of these charges that you make, for things such as baggage and allocated seating?”

O’Leary: “We have a range of prices out there, all Winter long, you can fly almost anywhere in Europe with Ryanair for 15 quid.”

McGovern: “You recently went on Twitter to answer people’s comments and you got quite a lot of interesting tweets, one of which said, ‘There’s a rumour that you intend to charge for each inhalation they make, after take-off.’ To which you replied, ‘Good idea, I’ve got a team working on it!’ Now I know that was obviously a joke, but there’s a lot of comments out there about the charges that you face when you go on a Ryanair flight!”

O’Leary: “I would say, almost none of our passengers pay those charges, I mean the kind of famous charge with us, the checked-in bag, only 20% of people pay it , 80% don’t! The gate bag fee, less than 1% of our passengers pay it! There seems to be this kind of hysteria, particularly in the UK media about charges that nobody pays. At Ryanair, we have charges to change passenger behaviour, not because we want your money. We want to send you on the lowest fare possible, which is what we do.”

McGovern: “So, you don’t want people’s money, is that what you just said?”

O’Leary: “Not from extra charges, we want to change their behaviour, we don’t want people to show up at our gates with an over-sized bag, very few do, some very few pay the charge. We don’t want people to show up at the airport without their boarding pass, which is why very few do, very few people pay the charge. And yet, the media, particularly here in the UK hyper-ventilate about charges which nobody pays, while ignoring the fact that our fares are falling, which is really good news for our passengers, and our business is booming!”

McGovern: “Okay Michael, thank you very much for your time.”

Getting It Off His Chest