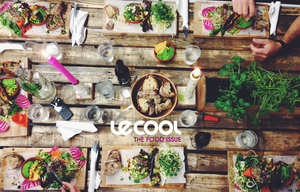 It’s part of a series of photos that were taken at the end of the day in The Hare, a temporary café we were running for the last month, as part of an exhibition in Temple Bar Gallery [Temple Bar, Dublin]. After all the customers were served, all the workers would sit down, break bread and have a family type mNOMNOMNOM