This is in celebration of this year’s successful Marriage Equality campaign. It’s for all those people who have been waiting to get married for a long time, or those who now can avail of this right, without forgetting all those who were denied that right up till now. At last! Many congratulations to you all.

By Debbie Jenkinson, a comic creator and illustrator from Dublin.

I draw, ink and then scan and colour digitally mostly. I enjoy that variety, and there’s nothing like real ink to work with. The cover sequence (above) is for our returning emigrants. I lived away from home for years, in Italy and New Jersey, so this homecoming-for-Christmas experience is something I remember well; the country laid out below us as we came in to land, coming into Dublin airport, the Christmas lights welcoming us. Being at home at last.

A chat with Debbie here

“When I started my career, the full horror of clipart had yet to be come apparent. Prior to this, designers and architects often used these rub-down Letraset transfers for images as well as basic typography for all kinds of projects. Whilst they were incredibly limiting, there was a certain charm in both their Mad Men aesthetic and their decidedly satisfying method of application. I’d swap my pressure sensitive graphics tablet right now for a handful of these vintage lovelies.”

“I wanted to capture that warm Thursday morning feeling when Le Cool plops into your inbox, and, at the same time, crowbar in one of my favourite Dublin sayings. Luckily, i had just signed up to an introductory screen printing afternoon with the amazing [Stoneybatter, Dublin7-based] Damn Fine Print, so it was a perfect chance to try a totally new process for this illustration…”

A chat with Graham here 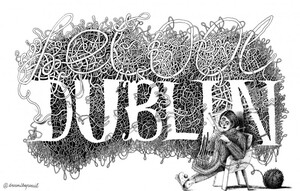 A chat with Monika here 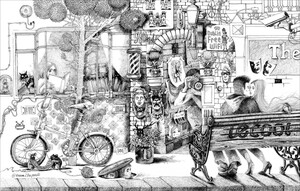 “When walking in Dublin, if you lift your head up you’ll see these little gems everywhere, especially in the city centre. As old as Dublin is, the buildings and their history, the city still feels young. It’s a collection of time.”

A chat with Monika here 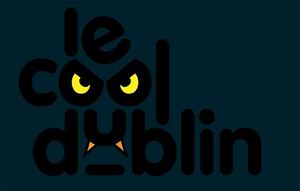 For the second image the subject was a given, Halloween. To keep with the same self-imposed theme of using a typographical solution [the coffee cover], I used the name to create an image to express Halloween. The playful use of letters and words is something I particularly enjoy, and I use it often as part of my design work for logos, identities and branding projects. Typography is an essential element I try to use as often as possible to make the solution more interesting and engaging. This particular

A chat with Lorenzo here

When I received the e-mail asking me if I would be interested in designing covers for ‘Le Cool’ Dublin I was sitting in a café sipping an espresso. While we exchanged e-mails, my mind started working on the design of it and I thought of my 31 years here. There I was sipping a drink that one could not find when I moved here—even decent coffee was unheard of. So the idea of using espresso to show ‘cool / changed Dublin’ seemed appropriate. Dublin is overflowing with coffee places, and finding a good espresso isn’t such a struggle anymore. I guess somewhere along the line our Italian ‘café’ culture became trendy and is now replicated and adopted as a national phenomena. I still rotate towards the Italian run places for the real shot mind you.

A chat with Lorenzo

I snapped this in Phoenix Park in late summer 2015, with the aid of my tripod and a little bit of “light painting” using the headlight from my bicycle, to add some depth to the scene. I love to see everyday scenes lit in a surreal manner, and the challenge of adding just the right amount of light by experimenting with different light sources. However it is worth noting that Phoenix Park is definitely not safe by night, it was spooky as hell, and I had my bicycle beside me at all times, so don’t do it kids!

A chat with Alan Currie

By photographer Alan Currie, who sez:

“This was shot on a Saturday evening photowalk around Dublin city centre when testing out a new 14mm fully manual lens, luckily the light outside Supermacs was sufficient and the lens fast enough that I could get away with a hand held shot, so less conspicuous than using a tripod. With this particular lens, both the aperture and focus had to be guessed, so it was quite nice to go “back to basics” for a change.”

Our cover this week might make Supermacs seem a place of great significance to an unsuspecting first time visitor. A romantic replacement for Clerys clock, it’s framed like a romanticised image of Katz’s Deli in New York. A must see until you see it.

The garish impact that Supermacs and numerous other cheap and disposable outlets have had on our main thoroughfare is both of a source of embarrassment and shame. Of course, they are not solely to blame as they’ve simply set up shop without a rule or regulation to curb their impact.

Thankfully, at long last there is the countenance of a chink of light and reason. The bleeding obvious is finally being recognised by Dublin City Council. “Councillors urge caution as takeaways, adult shops and arcades face O’Connell Street ban” was the headline in the Independent yesterday.

Of course whilst this happens, the old sign for the Ambassador cinema which has been there since 1954 has just been hidden from sight with promotional materials for a forthcoming 1916 exhibition. Was permission sought and granted for this?