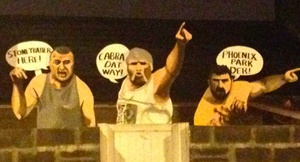 You may recall the street art depicting Travellers pointing to places in Dublin, across from Maureen’s shop in Stoneybatter, Dublin.

Well the artist Shota Kotake, from Japan, has taken it down.

The On The Batter blog reports:

“The figures were not stolen, as some had predicted, but taken down by the artist himself after a visit from the boys in blue.

“Shota explained: ‘We took them down as gardaí called into our house last week about it. A night before that a neighbour knocked on our door at 11pm to complain about it. Well, the cops were quite sound. They said there was more than one complaint. So it’s not really against any law or anything, but we all agreed that they have to be taken down at some stage as Travellers are a bit too sensitive a subject to bring upon the surface.'”

He also told On The Batter that he’ll be back with something ‘brighter and more fun’.

Top Of The World Ma