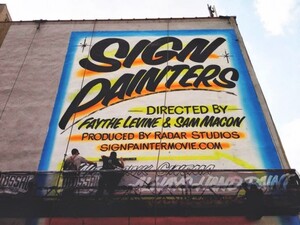 The trailer for Sign Painters by Faythe Levine and Sam Macon who, in 2010:

…travelled the United States, documenting the remaining practitioners of this near lost art, but also covering a resurgence of interest in the trade, from both the public and the people holding the purse strings.
Sign Painters, the first anecdotal history of the craft, features the stories of more than two dozen sign painters working in cities throughout the United States. The documentary and book profiles sign painters young and old, from the new vanguard working solo to collaborative shops such as San Francisco’s New Bohemia Signs and New York’s Colossal Media’s Sky High Murals.

Screening at Dublin’s Sugar Club on December 5th from 8pm.