[Conor Cusack’s] story raises some troubling questions, not least about the notion of “chemical imbalance” in the brain. And how many people are, perhaps, being misdiagnosed by psychiatrists?

Talk “therapy” works by helping people to get a new perspective on their problems and especially on the inadequate or flawed way they respond to them.

But with depression now a massive and growing problem in the modern world we need to ask if our secularised culture is actually giving people a distorted perspective on life.

Has the rejection of faith in a loving God, for example, left people feeling unbearably alone and isolated?

Is the loss of belief in eternal life creating an unrealistic pressure for happiness in this life? And a black hopelessness about the future?

With so much distress, including much depression, arising from distorted pride, do we need to forget about “self-esteem” and find a better understanding of humility?

How can we cope with unavoidable emotional or physical pain when we have abandoned the notion of redemptive suffering?

There will always be people who, for one reason or another, suffer from depression. But ignorance, neglect or rejection of Catholic teaching is making the situation much worse than it need be.

An editorial in the December issue of Alive

You Know Who To Call

Anything Hatstand in Alive!? 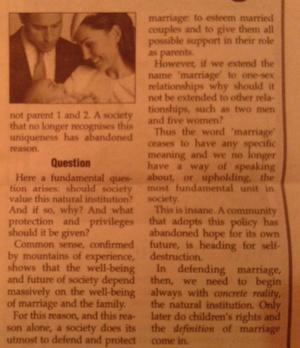