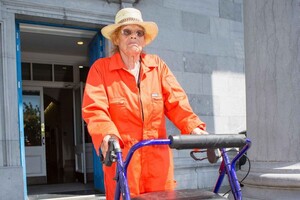 Margaretta D’Arcy, who is 79 and undergoing cancer treatment, was arrested at her Galway home on Wednesday and subsequently jailed for three months in Limerick Prison over protests against the US military using Shannon Airport.

A three-month suspended sentence, which she received for illegal incursion of the runway at Shannon, was activated after she refused to sign a bond to uphold the law and keep away from unauthorised zones in Shannon.

There will be a protest, against her imprisonment, outside the Department of Justice offices at St. Stephen’s Green in Dublin at 1pm today.

There will also be a protest outside Labour TD, Derek Nolan’s office by the Harbour Hotel in Galway, also at 1pm.

Previously: Here For The Duty Free

Meanwhile, At The Department Of Justice