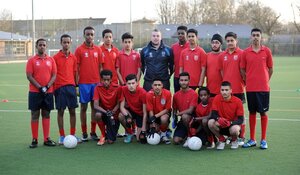 Made up of FOREIGNERS.

Southall Shamrocks was established after Irish geography teacher Brendan Doherty ran several football sessions last summer as part of National Sports Week at Featherstone High School in West London, where almost 99 per cent of its 1,500 pupils are from an ethnic minority. Now, the team are braving the cold winter evenings twice a week as they train ahead of their three-day tour of Ireland’s GAA hotspots during the school’s half-term break.

Is this a first for the GAA anyone?

‘If Not Sold, Will Be Burnt’