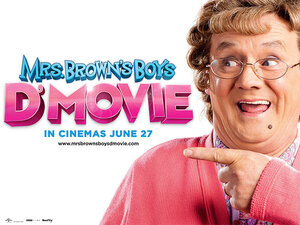 2. December’s Xmas Special was the most watched show last Christmas in Ireland OR Britain, with 9.4 million viewers. It’s big in Oz, too.

4. D’Movie co-stars the Queen Of The Red Cow Inn, cabaret legend June Rodgers, who was also in Agnes Browne (1999), Angelica Houston’s long-forgotten adaptation of O’Carroll’s novel The Mammy. She played the role before Brendan did. Watch it in full HERE

5. Broadsheet Prognosis: Begrudge away. Brendan’s too busy winning awards and playing stadiums to give a shite. Chances are, this will earn more than every other Irish movie released this year combined.