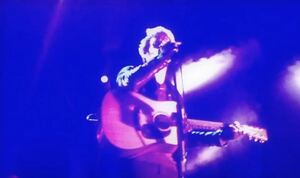 Kodaline playing ‘All I Want’ in the O2 Dublin last month, as filmed by their fans. Some mean crowd singing at around 5 minutes. Made using FanFootage.

Jury is still out on Ellie Goulding’s cover.

She’s no Bernard O’Shea, to be fair.

Previously: Could You Ask Your Readers What They Make Of This Demo?