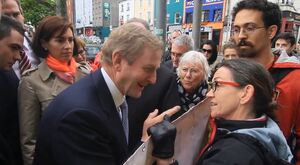 If Father Ted had been Taoiseach Ted http://t.co/WmI83LN7Tv

A video clip has emerged of the Taoiseach Enda Kenny on the campaign trail in Galway.

People Before Profit Alliance’s Dette McLoughlin confronted the Taoiseach on the issue of water charges.

“You’re not from Galway at all”

What did Enda Kenny mean by that question? (Kernan Andrews, Galway Advertiser)

Previously: Enda Kenny To Protester: “You Could Do With A Day’s Work, I’d Say.”

“I Come All The Way To Leitrim…”

Putting A Glas On It