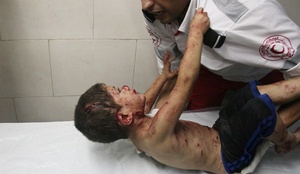 An injured Palestinian boy in a Gaza hospital yesterday.

Irishwoman Elaine Bradley is working as a human rights activist in Palestine where she sent us this report this morning.

Waking up I turn on my laptop to see what has happened in the while I slept. I am almost instantly hit by an image. I can’t make out if it is one body ripped in two, or two bodies, both missing a number of parts.

By the clothes on one, I am guessing it it is a young man – jeans and a belt that my son might wear. The human remains are against a wall in a pool of blood, draped over with blood soaked sheets. The photo is taken in a hospital, and is accompanied by the bizarre scene of the twisted metal of hospital beds in the total wreckage of what was a ward.

My friend who posted this image declares that he has a policy of not posting gruesome photos, a policy that he has now abandoned. Why? Because “This is the hospital that Israel shelled today… But the BBC felt it was better use of our license fee money to have [reporter]  John Simpson show us a broken chandelier in Sderot instead.”

Five  people were killed and 70 injured in this place of healing, where men and women work, dedicating their lives to comfort and to mend other sick and broken human beings. I think of my daughter who is a nurse. Hospitals have special status, special protection under international law, as they should. Bombing a hospital is a war crime.

And yet this is the second hospital that Israel has bombed that I am aware of in the two weeks of this onslaught, where one of the world’s most sophisticated military machines has pitted itself against a locked in, half starved civilian population.

Where are the international community? Where are the guardians of the laws demanding that this stop? Yesterday I saw Navi Pillay, High Commissioner for Human Rights with the UN on television. It was in Arabic so I didn’t know what she said. I went to the internet and found her statement.

The bit that jumped out and slapped me in the face was where she expressed her “concern”. Concern? I am concerned about things like the size of my phone bill and whether my cat has settled in to her new home. Concern for Gaza, where now over 570 people have been killed, 80% civilians, last count 132 of them children. Over 3,500 people injured and maimed – a 5 year old with her legs amputated, Concerned? What about outraged? Appalled? Horrified?

The UN are concerned and the mask is off. This latest holocaust against Gaza has exposed a world where our media lie, and spin the truth. Where craven politicians will not stand against power – John Kerry saying Israeli is besieged by Hamas- do I laugh or cry? My own government repeating the zombie mantra about Israel’s right to defend itself as they watch women and children buried in the rubble of their own homes.

And all the while Israel continues its colonisation of Palestine, settling jews from Eastern Europe and the Bronx on land that is not theirs, criminalising – labelling as terrorists the rightful owners, to make their misdeeds acceptable to a willing-to-be-appeased-just-give-us-the-right-soundbite global audience.

Say “Hamas” often enough and no one will notice. Exposed is a world where the institutions of human rights and justice offer platitudes but no action and hold yet another emergency meeting, having never implemented the recommendations of the last report, or the one before, as to do so would “jeopardise the peace process” according to the US and Israel. The Fucking Peace Process?

And while the UN frowns a collective bureaucratic, high salaried, important people in suits doing important things frown of concern, a friend of mine is pulling out the stops, navigating Israel’s impenetrable system of closure to get baby formula into Gaza. From the complications, it is as if he were smuggling crack cocaine inside AK47s.

I haven’t had my coffee yet, haven’t woken up. But I swear, that I will turn my rage into action for justice. Israel cannot once again evade accountability for these crimes. And to all the institutions that have collaborated in this gross injustice, by repeating the lies or by looking the other way, you will crumble and fall. The mask is off and people know.

A Star In The East