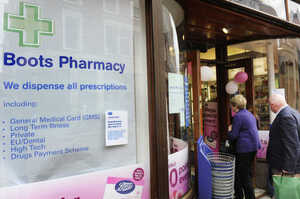 Susan Mitchell, the health correspondent with the Sunday Business Post, spoke to Rachel English on Morning Ireland this morning in relation to the price of generic medicines in Ireland.

Rachel English: “Tell us about some of the price differences between here and the UK because there are some quite staggering differences.”

Susan Mitchell: “Some of them are absolutely colossal, you’re right. We have one which is called, the generic name of this drug is Olanzapine and the original brand would be called Zyprexa which is what a lot of patients would know it as. The British price is €2.65, the Irish price is €71.97, so it’s just absolutely massive.”

Mitchell: “It is extraordinary. Now, to be fair, that was the biggest variation we’ve seen but many of the others were also, were also huge. There was another psychiatric drug called [Anti-depressant] Seroquel, the brand name I’m not even going to attempt to pronounce it but the Irish price is €34.80, in other words what the HSE is paying. The NHS is paying €2.90. And there were many, many other examples for a variety of different medicines, medicines to treat breast cancer, statins, which are used by hundreds of thousands of patients, so these are adding up to an enormous amount of money for the State and the taxpayer.”

English: “For years, we were told that the wider use of generic drugs would be key to bringing down health costs, so why are the prices of these drugs so high?”

Mitchell: “I really cannot answer that. The HSE has brought down the prices. They have. The reference price which they’ve now set for all of these medicines and they’ve set prices for about 20 medicines over the past year is certainly lower than what it was. But the differentials between here and the UK remain absolutely colossal. I don’t know why that is. The HSE says they have to be cognisant of things like security and supply, we’re a smaller market. There is, I know that some people would, you know, theorise that we have to keep big pharma in the country happy because they employ so many people. A lot of other people dispute that because they say that nobody in pharma would expect variations of this magnitude, it’s more to do with incompetence more than anything else. I really can’t explain why the variations are so huge.”

English: “So, what’s being done to tackle this problem?”

English: “Have the pharmaceutical companies had anything to say about this?”

Mitchell: Very little, they’ve said very little. Other than the fact that prices have come down, and indeed they have. They also would say that we’re a much smaller market. And, another important point and I think that is a valid point is that we have had a very, very small number or the competition for generic market here in Ireland has been quite small in the past. So there aren’t as many companies competing for businesses. So that possibly is a factor but as people suggested to me, why don’t we bypass all the generic companies here and go straight to the UK and buy our medicines from them?”

English: “And at the moment, how is the price decided? Who does the deal for the State?”

Mitchell: “The HSE does this. So effectively what happens is the Irish Medicines Board groups a bunch of medicines in the same bracket. So these would all be off-patent and generic medicines. So if you take something like Atorvastatin, the original brand was Lipitor. When that comes off patent, the Irish Medicines Board bunches all of the various different Atorvastatins in a particular group. And the HSE then goes in and sets what is called a reference price. And this reference price is the amount that the HSE will reimburse pharmacists for that medicine. If someone with a medical card wants the original branded product, or a more expensive variation, they must pay the difference themselves, but this is what the HSE is paying.”

English: “You’ve been writing about this for several years now. Do you see that any attempt is being made to try and address the problems?”

Mitchell: “There is an attempt being made but I feel it’s inadequate. I don’t think that anybody can even try to justify variations of this magnitude. I think there’s something seriously wrong. And if the HSE is finding that pharma companies aren’t playing ball, well then it should come out and say this, and say this publicly and arguably maybe look to bypass some of these smaller companies in this market and go direct to the UK and purchase our medicines there.”