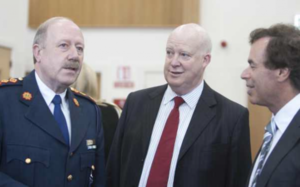 Further to the publication yesterday of the Report of the Independent Review Group on the Department of Justice and the revelations that Brian Purcell is to step down from his role at the Justice Department – and to be re-assigned elsewhere – Ivan Yates put forward his thoughts on the matter during Newstalk Breakfast this morning.

“These are the questions that Brian Purcell has refused to answer. On the day of the 10th of March. And remember the context of this was to save Shatter. On the 10th of March, the Garda Commissioner Martin Callinan sends a couriered letter to the Secretary General, Brian Purcell. This was no ordinary letter. It was the months of analysis of a working group involving the gardai, the attorney general, civil service about recordings of telephone conversations from the gardai.”

“The first line of the letter says, on the 10th of March, bring this letter to the minister’s [of justice] attention, in accordance with Section 41 1D of the Garda Siochana Act 2005. The question that Purcell won’t answer is why did he not bring that letter to the attention of Alan Shatter for 14 days. And, from the get go, I had serious reservations about the veracity of that.”

“The second issue that he must answer is: there is indications that on the weekend, on the 21st of March, that Callinan was prepared to withdraw the ‘disgusting’ remark and was advised not to do so. And the next set of questions he won’t ask [sic] is: Purcell was called to the Taoiseach’s office on Monday the 24th of March and asked questions in relation to the tapes controversy.”

“Now, in my view, the tapes controversy was significant for the Bailey case, but otherwise it was a bottle of smoke. It was blown out of all proportion but it was Tapegate, which led to the drive-by sacking as such. So then Purcell was then dispatched on the Monday night to the house of the Garda Commissioner and he resigned. What then happened was the next morning, on the Tuesday morning, the first the Cabinet heard of this was that they were notified at 9.30am, before the Cabinet met, that Callinan was retiring. No explanation was given.”

“Now the law, and the Constitution says, yes, a Government can fire a Commissioner but the Taoiseach does not have that power. It must be a resolution of the full Government sitting and, therefore, what then happens is it’s not what you do when you’re in a sticky spot – which was all to get rid of Callinan, to save Shatter – was the cover-up.”

“And, basically, what I’m suspicious of is: that Purcell is being paid €200,000 a year to keep his mouth shut. Now what the strategy was, to set up a Commission, under Niall Fennelly, to make sure that this investigation of Tapegate – but also the specific instances of what happened in relation to the Garda Commissioner – to kick this beyond Spring of 2016.”

20 thoughts on “‘Is Purcell Being Paid To Keep His Mouth Shut?’”