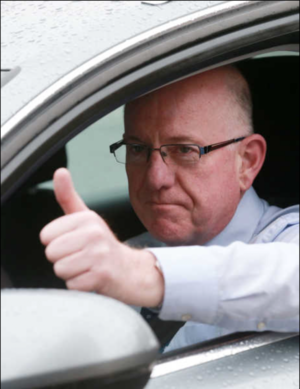 Foreign affairs minister Charlie Flanagan spoke to Seán O’Rourke this morning and, at one point, they discussed the abortion story. Specifically, they talked about how the HSE are currently carrying out a review of the care given to the young woman.

Seán O’Rourke: “What about the possibility that what emerges from the report may suggest to you and colleagues that the Protection of Life During Pregnancy Act be revisited in some way?”

Charlie Flanagan: “Well there is a suggestion that the act isn’t working. However, I think before we can be conclusive on that, or before we can form an opinion on that, we need to be appraised fully of the facts and the circumstances. There is, built into the legislation, and you know, we’re not going to revisit the lengthy hearings, the submissions and the engagement that ultimately formed the act about this time last year. I think it’s important that the review mechanism, under the act, be allowed take place. If the current case means bringing that forward a few months, then so bet it. There doesn’t appear to be an appetite for a further referendum. However, it’s important that Government does address the issue in the context of the facts of this, of this particularly harrowing case so early into the operation of the legislation.”

O’Rourke: “What would you say to the suggestion, and it’s put forward increasingly by your partners, in Government, in the Labour Party, that 31 years on from the original amendment, the article 40.3.3 that was inserted into the constitution, that that should now, in the round, be examined with a view perhaps to putting the issue before the people again.”

Flanagan: “Yeah, well, I think it’s important that we look at, we’d say the Fine Gael position, my party position. And before the last election we made three essential and important points. Firstly, we said that we wouldn’t legislate for abortion in Ireland and we didn’t. Secondly, we said… ”

Flanagan: “We had to address, it was incumbent upon us to address the issue of the European Court of Human Rights’ judgement in the A, B, C case and that was addressed, in the form of legislation. And, thirdly, we promised that we women in pregnancy would receive an appropriate level of medical treatment that was necessary. That is inbuilt in the legislation and it’s important in the context of this case that you now mentioned, that there is adequate follow through on that and that we satisfy ourselves that there was an appropriate level of medical treatment and attention available to that person.”

Previously: At The Mercy Of The State

How To Get Into Festivals For Free This Summer

76 thoughts on “‘There’s No Appetite For A Further Referendum’”