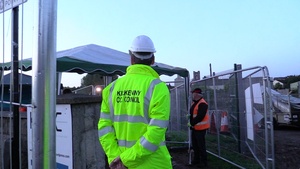 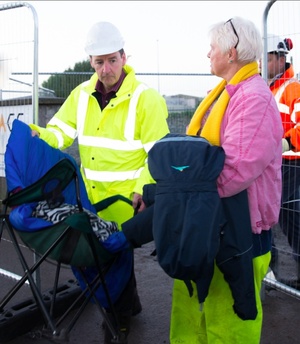 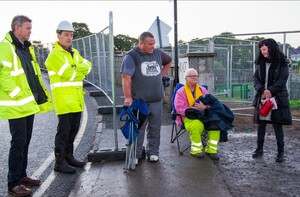 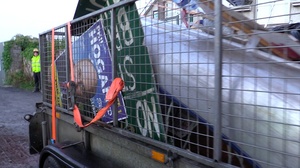 “At dawn today two members of the Save Kilkenny campaign were asked to leave the site of the Central Access Scheme (CAS) bridge in the city.
Some 15 workmen and up to 30 gardai swooped onto the picket site and asked the campaigners to vacate immediately. Locals Kay Brennan and Donal Coyne [pictured] asked to remain on site until other members of the campaign arrived to help pack tents, boats and other belongings.
…[but] Under the supervision of members of the unelected Executive of Kilkenny County Council workmen pulled up tents, tore down gazebos and threw personal items into trailers. They then erected railings across the site entrance and public footpath.
At this stage many more campaigners arrived but all vacated the area peacefully so no garda force was used. The campaigners said that picketing is set to continue and legal options are being pursued.
The campaigners, who are mostly supporters of the three main parties, said they would now be spreading their campaign throughout the city and at the ballot box next year in the upcoming by-election for Phil Hogan’s seat.”

Going To The Cat Laughs?

The Lady In The Raft

10 thoughts on “They Came At Dawn”