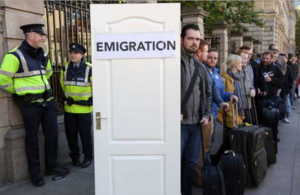 Members of youth groups from across Ireland outside Leinster House, Kildare Street, Dublin in October 2013

In April 2009, the State contained 1.423 million people aged between 15 and 35. In April 2014, there were 1.206 million in the same age group. That’s a reduction from one generation of more than the entire population of Limerick city and county. This is the age group of rebellion, of adventure, of trying it out and trying it on. It’s the generation that annoys its elders and outrages convention and challenges accepted wisdom. It is demography’s answer to the stultification of groupthink. It is not always right but without its capacity to drive everyone else up the wall, smugness settles over everything like a fine grey dust.

Look anywhere in Ireland that is not a specific redoubt of youth culture, and the place is heavy with middle-age. From the civil service to the media, from politics to the arts establishment, you find demographic landscapes that have been largely frozen for the last six years. The thinning ranks of the young have been unable to mount any sustained challenge to the self-serving orthodoxies of their elders. Which would be fine if the place they leave could afford the consequent culture of stasis and complacency

Previously: Correlation Does Not Imply Causation

A Farewell To Ireland

13 thoughts on “‘Heavy With Middle-Age’”