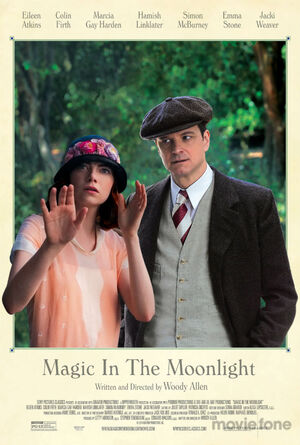 1. Under the pseudonym of Wei Ling Soo, Stanley Crawford (Colin Firth) is the most celebrated magician of his age. He embarks on a mission to the Côte d’Azur to debunk the clairvoyant Sophie Baker (Emma Stone).

2. Holy crappy Photoshop Batman! Colin Firth must hold the record for actor appearing in movies with the worst …posters… ever. It must be written into his contract.

3. Woody Allen is the Prince of filmmaking. Since What’s Up, Tiger Lily (1966) the prolific 78-year-old has delivered a new movie almost every year. Magic in the Moonlight is the 46th movie that he has written and directed.

4. Still, not the greatest foster parent ever.

5. After last year’s phenomenal Blue Jasmine, Magic in the Moonlight has been getting mediocre reviews. But hey, with a workload like Allen’s, you can’t expect them all to be hits.

9 thoughts on “Broadsheet Trailer Park: Magic In The Moonlight”