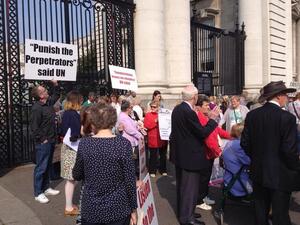 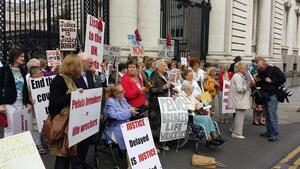 “First of all there’s no admission of wrongdoing, secondly there’s the issue of legal rights – survivors will be required to sign away their legal and Constitutional rights as a condition of entry to the scheme, before they know the outcome of a process controlled by the State, in other words before they know what money they will be offered.”

Pics via Siobhan Bastible (top) and Sam Griffin (above)

Meanwhile, Outside The Department Of Finance

Are You Fighting Fit?

6 thoughts on “Meanwhile, Outside Government Buildings”