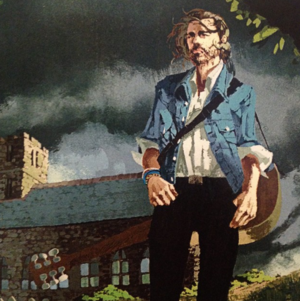 Last fall, Andrew Hozier-Byrne, a twenty-four-year-old Irish singer-songwriter with a deep, burnished voice, released his first EP, “Take Me to Church.” The dark and soaring title song struck a nerve: its lyrics confront religious dogma, and its arresting video addresses homophobia and oppression in Russia. The song ricocheted around the Internet, with more than seven million views on YouTube, and the EP went to No. 1 in Ireland. Hozier (he goes by his middle name) grew up in the country, in County Wicklow, and his entertainment was limited to his parents’ record collection: albums by Nina Simone, John Lee Hooker, Tom Waits, and other soul and blues artists. As a teen-ager, he led an eight-piece blues band, and his precocity is evident in his current work, which has the spare lyricism of an old soul. Hozier’s self-titled début album comes out on Oct. 7, and he’s on a headlining tour of North America that ends at Irving Plaza on Nov. 5-6.

Hozier’s portrait and ‘write-up’ in The New Yorker.

Take Me To Hozier

Tell The Cat To Chilly

21 thoughts on “Anything Good In The New Yorker?”