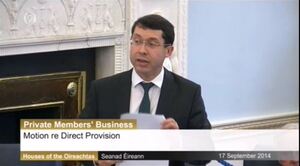 Further to his earlier appearance.

Senator Ronan Mullen speaking in the Seanad earlier on the issue of Direct Provision:

The treatment of women in the system is deplorable. There are several male-only reception centres in the State. But there are none which provide solely for women. Many women who seek asylum in the State are fleeing the most gruesome and most unimaginable conditions sometimes involving sexual abuse or rape. And for these victims to be placed in a system where there’s an underlying fear perhaps in some cases of a recurrence of abuse is really shocking.

That’ll Be The Dei