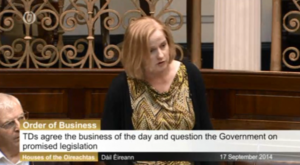 This afternoon Clare Daly, Mick Wallace and Ruth Coppinger challenged the Minister for Health Leo Varadkar on the Eighth Amendment.

Clare Daly told the Minister to:

“Wise up. You’re a young man. Ireland’s abortion reality and rates are pretty much the same as they are in every other country.”

“Is the Government more focused on the next election than on the suffering caused by the denial of services to women seeking abortions due to rape, incest, fatal foetal abnormality or serious risk to health?”

Ruth Coppinger suggested the referendum on marriage equality and repeal of the Eighth Amendment be held on the same day and said:

Earlier: What Do We Want

For The Love Of God

14 thoughts on “An Inconvenient Ruth”