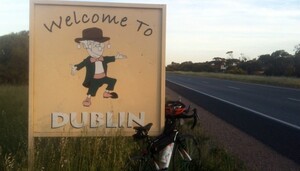 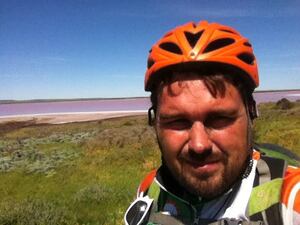 The one 60km north of Adelaide, Australia silly.

I am 33 years originally from Leitrim, and in late 2010 I weighed twenty stone, was bitterly unhappy in my professional life, single with no prospects and came to the point of considering taking my own life.
I made a different decision during that time to change my life around and with the help of a bucket list, my personal challenge ten, I lost 25 kgs, learned to swim and cook, completed a marathon, triathlons, cycled around New Zealand and countless other sporting events and went on fifty blind dates during the year.
Four years later, as an ambassador for Cycle Against Suicide, I’m six months into a 30,000km cycle around the entire planet to try to raise awareness of suicide prevention, mental health and depression. I have been giving talks in schools and have been featured in numerous media outlets along the route so far. I’m hoping that my story will be an example to other vulnerable people that there is an option, that live can be lived and enjoyed again regardless of how dark the situation might be.
Whether it’s financial issues, professional dissatisfaction, body issues, relationship breakdown or any other of a multitude of issues which causes this dilemma to raise it’s ugly head, Suicide remains a permanent solution to a temporary problem.
I am currently in Adelaide, South Australia after visiting Dublin and after pedalling across 20 countries in Europe, the Indian Sub Continent, South East Asia and from Perth to Adelaide. Over the next six months I will complete the circumnavigation through the remainder of Australia, New Zealand, Canada, USA, Mexico, Spain, France, UK and Ireland.
To help make this a reality I have been shortlisted for a grant towards the remaining costs of this trip, specifically spare parts and flights, from the Version 1 Community Trust and require votes to secure first place and the accompanying grant. I am currently leading the competition but by a very ‘slim’ margin….”

23 thoughts on “Meanwhile, In Dublin”