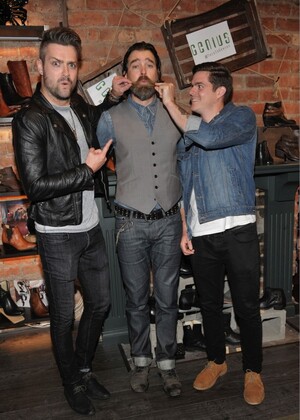 A pair of shoes/boots from Genius, Exchequer Street, Dublin (worth up to €120) was up for ‘grabs’ to the wittiest caption to accompany the above image.

G_A: “The moustache wax hardened, the two men took hold and with the power of denim and leather, proceeded to lift the bearded messiah up off the ground. Then the sky bled and the seas boiled.”

qwerty: “Elaborate canine smuggling attempt foiled – the dog has been returned to its overjoyed owner.”

nevan: “So moustache pulling has no affect on you, eh? Then it’s time for the finger! Now tell me, WHERE DID YOU HIDE MY PENNY FARTHING??”

Mark: “I saw my Granny tune in a radio once, I’m pretty sure this is what you do”

Mick Flavin: “You know how to whistle, don’t you Jason? You just get two blokes to draw aside your ridiculous moustache, and blow.”

Mike Dublin: “I mustache to Genius for my new shoes.”

bertie blenkinsop: “So George Clooney’s bride isn’t the only beard to hit the headlines this week…”

Will YOU Shop For Good?