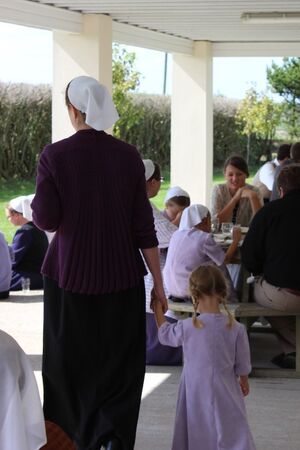 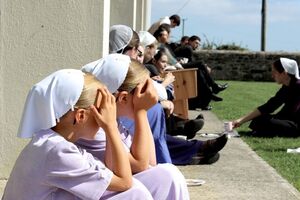 Ireland’s only Amish community in Waterford this Summer

“Since finding their feet in Dunmore East the community is now firmly established as Ireland’s first Amish-Mennonite community made up of roughly 75 people. The community is made up of Amish and Mennonites from mainly America, Poland and Ukraine. There is also one newly Amish Welsh family, who converted to the Mennonite way after becoming increasingly exasperated with the Anglican church.

Here, the men and women follow traditional roles with the women primarily working as care-givers and homemakers while the men work mostly in blue collar jobs such as carpenters, blacksmiths, plumbers and shopkeepers. Although men are the main breadwinners, Dan explains the men try to do flexible jobs that allow them to stay at home as much as possible with their family. One of the community’s main sources of income is a co-operative business they set up near their homes, which includes a grocery shop, a bakery, a book shop and a wooden furniture store.

…As well as operating under their own framework of what is just, the Amish are perhaps most famed for living without modern technology. Pastor Dan, who grew up Amish, admits that the devout Amish ‘live a hard life with no electricity or phone’ but that in the Waterford Amish Mennonite settlement, which is more liberal in its belief system,‘we have more modern conveniences’. Indeed, the extent of how much they shun the applications of the modern world was initially confusing to me. I had specifically avoided bringing my laptop to take notes given my assumptions about the Amish being anti-technology so am more than a little surprised to see the pastor opening his laptop mid-sermon, connecting it to a projector and preceding to give a PowerPoint presentation on ‘grace’…

…We finish the day with some final few hymns, or what for me is further lip syncing and then the crowd gradually start to clear up and get ready for home. Taking this as my cue to leave I gather my things and say my thanks. At the door I bump into Rachel, a girl about my age and out of pure curiosity quiz her on the depth of her knowledge on certain current events and pop culture. Do you know who Barack Obama is? Yes. Enda Kenny? Yes Facebook ? Yes, some members even have it. How about selfies? Yes but she’s never taken one. Hmm I see my lift pulling up so try to think of the most arbitrary thing my generation universally knows of. Just as she turns to leave, I settle on the perfect example.

94 thoughts on “The Simple Life In Dunmore East”