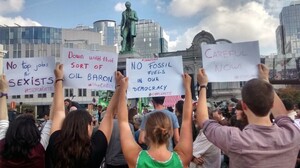 “Taken outside the European Parliament by Friends of the Earth Europe. Pretty much every protest you go to with an Irish person – no matter what the cause – the classic Father Ted protest signs will inevitably show up. This protest is against Miguel Arias Cañete‘s appointment as EU Climate and Energy Commissioner. Up until his nomination, he was chairman of two oil companies, so it’s pretty safe to say he’s something of a dodgy pick for the job. The petition against him has nearly 300,000 signatures already….”

12 thoughts on “Meanwhile, In Brussels”