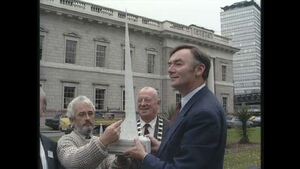 On this day in 1989, Minister for the Environment Pádraig Flynn unveiled a new sculpture ‘Spirit of The Air’ to be installed at Dublin Airport.

1989 was the same year developer Tom Gilmartin wrote a cheque for £50,000 as a donation to Fianna Fáil as suggested by Pádraig Flynn. The cheque never made it to Fianna Fáil HQ and was subsequently discovered by the Mahon tribunal that it was used to buy a 100-acre farm in north Mayo by Mr Flynn’s wife, Dorothy.

He was then made our European Commissioner.

The Return Of Uncle Gisto

10 thoughts on “A Massive Prick”