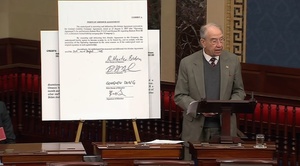 On Monday, Grassley revealed the CCP gave Hunter Biden $100,000 and that James Biden (Joe Biden’s brother) received hundreds of thousands of dollars from companies linked to the Chinese Government.

Moments ago, I successfully entered the hard drive of Hunter Biden’s laptop into the Congressional Record. 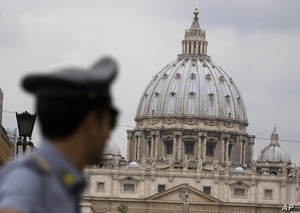 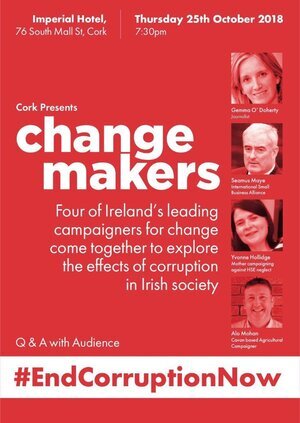 Looking forward to be talking in #Cork this evening. @I_S_B_A is changing the way opposition parties view banks. @gemmaod1 trying to defend those who feel they have no voice. 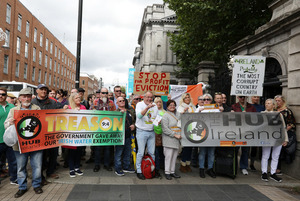 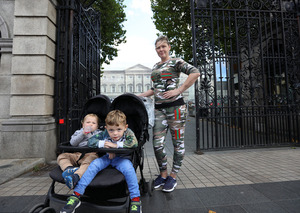 Protesters against corruption in Ireland, including Margaret Cash (pic 2) whose children slept in a garda station last month, greet politicians as they return from their summer holidays. “This is a come-along event, no tickets required, all welcome on the evening. We’ll be talking about how we can and should do things differently – how do we make politics serve the people rather than the golden circle of the same faces and names that keep cropping up; and how do we develop and implement proper transparency with real accountability in a way that allows people to trust the system? I’ll open up, Catherine Murphy will speak, followed by Fintan O’Toole, then I’ll close.”

Previously: Someday My Prints Will Come

Sepp Blatter and Michel Platini have each been banned from football for eight years. More: https://t.co/K5DeOQRkHv pic.twitter.com/0HwcJTbcfp

Evil FIFA overlords Sepp Blatter and Michel Platini have been banned from all football related activities for eight years. 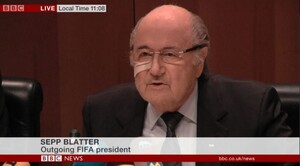 Blatter: ‘Sorry I am still somewhere a punching ball’ (BBC) “I border on resenting since I came up [from West Cork] here how the agenda is set by the media continuously and I find it very difficult to understand and I think, if anything it is eroding our reputation and our democracy and how this house works is reactive pandering to the agenda set by the media.

I mean in fairness to Morning Ireland they even admitted that they call it “setting the agenda for the day” and we in this House [Dáil] go off on a, on a tangent following whatever the media are talking about, and the first thing that struck me when I saw this motion [a proposal by the Social Democrats to set up an anti-corruption agency] I was saying ‘God that’s very curious timing’ the day after following the programme on RTÉ last night but that was the most hyped programme.

…I didn’t see the programme I must confess at this stage but it was the most hyped and sensationalised and advertised, I didn’t see RTÉ promote anything with such gusto as they promoted that last week and here we are again in this House just reacting, doing the same thing reacting to the same agenda led by the editors outside in Montrose.

Maybe we should hand over the order of business to the editors outside in Montrose, and let them dictate the pace of, and what we discuss here.”

Earlier: Anne-Marie McNally: How To Stop This The saddest thing about the Prime Time special is that it will serve to put off more young people from getting involved in politics. What is needed is exactly the opposite however. Only by standing up for high moral and ethical standards can you hope to have them implemented.

Only by asking the tough questions where it matters will things change. That is why Ógra’s five representatives to the Fianna Fáil Ard Chomhairle will be proposing the immediate adoption of measures, including:

An obligation for annual full public publication of all political party accounts;

One single independent oversight body for ethics in public life covering both elected politicians and officials.

Sufficiant staffing of same body to carry out rigorous investigations of declarations akin to those done by RTÉ.

All candidates for election should sign a declaration of interests before the election…. The programme will reveal the extent and nature of breaches [of ethics legislation] across the political system. As a result of RTÉ’s investigation, a number of politicians at both council and Oireachtas level have already corrected the record. The programme also focuses on particular cases where evidence of direct conflicts of interest has been found.

Given the scale and, in some in some cases, the severity of non-declarations, the investigation narrowed to concentrate on a select number of councillors. An RTÉ undercover investigative reporter contacted these people. The programme will broadcast footage from these meetings and will reveal requests for personal rewards to carry out work as a public representative….

RTÉ Investigates – Standards in Public Office, Monday December 7 at 9.35pm on RTÉ One. Earlier, at a meeting of the Oireachtas Joint Committee on Foreign Affairs and Trade, Labour TD for Dublin South-Central Eric Byrne asked the Nigerian ambassador to Ireland, Her Excellency Mrs Bolere Elizabeth Ketebu about emigration, youth unemployment, inequality  and the role successive governments have played in corruption.