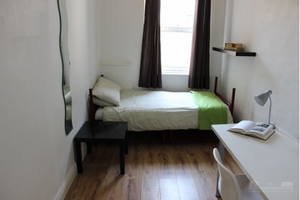 Are you a student?

We are two final year university students who live in Dublin and who wish to express our profound discontent with some of the situations we found ourselves in during the housing crisis that took place this summer in the Irish Capital, and the clear discrimination against students, which is common practice in the rental market.

Between June and September, we were actively looking for private accommodation in Dublin. We sent several hundreds of emails, made hundreds of phone calls, many of which were from abroad, went to numerous viewings and spent a lot of time, money and energy looking for a place. This house hunt was long, stressful and, overall, a very unpleasant experience which resulted in us sacrificing a large part of our summer, spare time after work, family time, and the possibility to advance with college work (readings, dissertation, etc).

We finally found a place two weeks before the start of the academic year. A place that we are not entirely satisfied with, but had to take because we had no other decent offers. We are somewhat relieved that we were lucky enough to have found something, as we are very aware of the fact that many students were not as lucky and are therefore forced to commute, live in hostels or even have to take a year out of college.

One of us is a final year student in the faculty of arts and humanities, who worked the whole summer in a well-respected office in Dublin and will continue to work part-time throughout the academic year.

The other is a final year Political Science and Geography student who works during the summer months and is financially supported by her father who works in one of the European Institutions in Brussels. Both of us have letters of reference from all our previous landlords stating we are responsible tenants, that the rent and all utility bills have always been paid on time and that we left our previous flats in good condition. Furthermore, we both have good work references from well-respected institutions.

Having such documents, one must wonder how it took us three months to find a mediocre residence.

To us, the answer is very simple. The housing crisis meant that it was hard for everyone to find a place in Dublin due to the fact that this year there was a 43% drop in supply in the rental market and a 7.5% increase in rental prices, but in particular: students have a clear disadvantage and are discriminated against.

Many, many housing ads online clearly state “no students” or “young professionals only.” Many times, when we called or sent an email asking for a viewing, the agent or the advertiser simply explained to us that we have no chance of being considered as potential tenants, because we are students, and we are simply wasting our time trying. Many times, we were told that the landlord or landlady will just not accept any students.

Many times, the agent or advertiser was simply rude or condescending. We do understand that the real estate agencies were under tremendous pressure as they had to deal with this huge demand for housing, but that does not, in any way, justify being rude or their behaviour vis-à-vis students.

We can assure you that it is extremely frustrating when the whole day, phone call after phone call, you are being rejected just because of your current occupation. We knew the definition of the word “discrimination,” but during this house hunt we disconcertedly learnt new things about what being discriminated against really means.

The Equal Status Act of 2000 promotes equality and prohibits certain forms of discrimination. It also applies to lettings.

In an article that is part of a Ten Step Law series written by Roddy Tyrrell, a Board Member of the Property Registration Authority it clearly says that:

“When you are satisfied with your prospective tenant’s ability to pay their rent it is time to interview them. Be careful with the questions you ask as equality law prohibits you from refusing to offer accommodation or from terminating a tenancy on any of the following nine grounds: gender, marital status, family status, sexual orientation, religious belief, age, disability, race, membership of the traveller community. You should base your decisions on the merits of the prospective tenants.”

In our experience, our mere requests for accommodation or viewings were often declined before we even had the chance to prove our ability to pay rent. All this on the grounds that we are students. We strongly believe that this is utterly unfair.

It is true that the Equal Status Act of 2000 does not state that discrimination on the bases that someone being a student is illegal. However, we believe that being a student is, in the majority of cases, closely related to age.

The Equal Status Act states that “Treating a person who has not attained the age of 18 years less favourably or more favourably than another, whatever that other person’s age, shall not be regarded as discrimination on the age ground.”

Meaning that all people over the age of 18 should be equally treated; should not be put at a disadvantage because they are younger than young professionals who are also looking for accommodation.

Having guarantors and working part-time and during the summers, we believe that we are as able as ‘young professionals’ to pay rent and all the utility bills and that we should not be discriminated just because we are slightly younger and because we are studying.

More than students who can prove they have the financial means to pay for accommodation, more than students to whose credibility a guarantor can attest, students as a whole must be treated the same as everyone else.

Furthermore, in our experience, some landlords were offering a place on the condition that we pay double the deposit, just because we are students. We understand that some landlords have had bad experiences when renting to students. It is true that some young adults are inconsiderate of the premises they are renting: causing damage, disturbing the neighbours or being unreliable.

However, we must insist that this is not the case with all students, and that landlords can have bad experiences with all sorts of different people. Once again: students who have, in the past, rented accommodation and can provide good references should be treated the same as everyone else.

And so we begin to see that the situation in Dublin is simply ridiculous. There are over 80,000 students here – a common knowledge number that is spoken with false surprise when referencing the serious lack of student accommodation.

Trinity College, for example, has just under 1,700 beds for a student body of 17,000, according to its accommodation office. This means that around 15,000 students either live with parents or relatives in Dublin, or must find accommodation by themselves.

With such a high demand for student accommodation, a demand that is not likely to decrease any time in the foreseeable future, it is surprising that the majority of universities and property developers do not seem interested in investing and building more student accommodation.

Even if they do have the intention of doing so, planning and building would take several years, which does not solve the present problem of students who are left to fend for themselves in the ruthless rental market.

If students are obliged to give up their studies just because of a lack of accommodation available to them, this country is clearly shooting itself in the foot. It is wasting the potential of its youth.

We are shocked that, from as early as July it was predictable that the housing crisis could so badly affect students. During the whole summer, neither the universities nor any relevant authority intervened in any meaningful way to help the students out.

There is a serious need of regulation in the rental market; universities should be more effective at assisting students in their housing hunt and the authorities should provide some kind of justice and equality.

Since 1963, the rental market in Ireland has been through cycles of booms and slumps that are due to many factors and economic pressures causing too much demand or too much supply of housing. We know that it is difficult to control these market forces, but it is about time that we see some regulation; some effort. Firstly, because the housing market is not stable in Ireland and every property bubble affects the whole economy of the country and in the long-term no one benefits from this; and secondly because there should be a better degree of equity among people living in Ireland.

We demand that the open discrimination against students in the rental market stops.

Where Will We Put The Students?

Have You Room For A Student?

47 thoughts on “Getting Their Digs In”