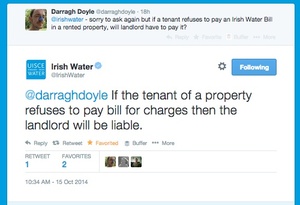 “Almost in direct contradiction to what “they” said here and here. Customer service rep giving out wrong information?”

“I believe I mentioned in my earlier post (‘No contract No Consent’?), under Section 21 of the Water Services (No. 2) Act 2013 (read in conjunction with the definition of ‘customer’ in Section 2 of the same Act) liability for water charges rests on the ‘occupier’ of the premises in respect of which the charges have been levied.

In the circumstances, there is no possibility that a landlord could be deemed an ‘occupier’ of premises for the purposes of liability for water charges in respect of any period while a tenancy of that premises is ongoing.

What may have caused confusion is that Section 21(5) provides that the ‘owner’ of premises is deemed to be the occupier of the premises until they prove otherwise. All a landlord has to do is produce a tenancy agreement to remove any contention that they are liabie for water charges for the duration of that agreement, placing this liability for such charges exclusively on the tenant.”

@darraghdoyle Just to confirm if the tenant does not return the pack the landlord will be liable.