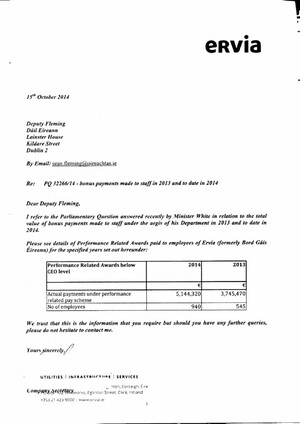 “I have received correspondence from Ervia, the parent company for Irish Water and Bord Gáis Networks, which reveals that 545 staff shared €3.7m in bonuses in 2013 but there has been a massive jump in bonuses paid out this year.So far in 2014 Ervia has paid €5.1m in bonuses to 940 staff. Are we really expected to believe that this does not include any bonuses being paid to staff at Irish Water? The Taoiseach told the Dáil on October 7th that “no bonuses have been paid to anyone in Irish Water”. Does he stand over that statement today?”

22 thoughts on “No Bonus Claims”