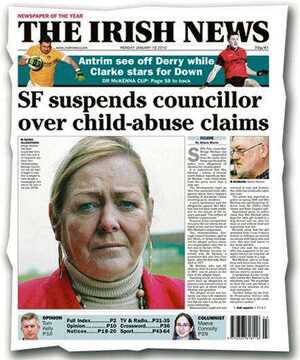 Martin Óg Meehan, son of the late Martin Meehan wrote last year about his belief of a cover-up of sexual abuse within Sinn Féin.

Briege McLaughlin was elected as a Sinn Féin councillor in Newtownabbey in 2001 and was formerly married to Martin Meehan senior. She admitted child cruelty and assault in Belfast Crown Court last year and received a suspended sentence. After her guilty plea, the seven sexual abuse charges she faced were “left on the books” and not proceeded with.

Eighteen months after the tragic death of our mother, the Meehan family threshold was crossed by our Dad’s new girlfriend, Mrs. Briege McLaughlin. She was already expecting Dad’s baby at the time. The arrival of this woman, left my siblings and I quite bemused and confused. However, my brother, sister and I agreed to make her welcome because our father deserved happiness after the untimely demise of our mother.

To the best of my knowledge, Briege couldn’t have been nicer between February and July, 1979 in our terraced Ardoyne home. We were at school most of the time and hardly had much contact with Briege, as kids we also went to bed at nights pretty early.

Almost immediately after our Dad’s arrest and incarceration in Crumlin Road Gaol, Briege began a depraved campaign of abuse against my sister Mary. The details of which are too harrowing for me to write about, as they cause me and my family so much pain. Although, they have been widely reported in the Irish media in recent days, after Briege finally admitted her guilt to a Belfast Court on Wednesday June 4, 2013.

Thirty-three years after they occurred in Northwick Drive, Mary sought medical, Social Services and school reports from the years, 1979 and 1980 concerning her after our Dad died suddenly in November, 2007. She never wanted to hurt him regarding Briege’s crimes against her and she respectfully waited until he left this world, before initiating her struggle to get justice from Briege. As everyone now knows, he was in a British Gaol at the time and Briege’s twisted crimes have absolutely no bearing nor reflection upon his memory. Kevin, Mary and I do not blame our Dad, one iota for what happened back then. He could not have possibly known his then girlfriend was a child abuser.

Briege McLaughlin (née Hogg) not only ‘fooled’ our father, she also duped her two children, the majority of Provisional Sinn Féin activists and the wider community that she was a ‘normal’ person, mother, wife and Republican. We knew the truth but didn’t inform anyone of the true nature behind her unprovoked assaults, mental torture and drunken outbursts upon our sister in our home. We know for a fact that senior members of Sinn Féin and the IRA within North Belfast covered up Briege’s campaign of terror. Over a hundred brave Ardoyne women protested outside our home about what she had subjected Mary to after she was taken and placed in a safe environment away from Briege. Sinn Féin knew many of the facts behind the protest and yet not only permitted her to join the fledgling party but gave her senior roles in it’s Comhairle Ceanntar (District Executive) in the early Eighties. They also selected her to stand in successive elections as a party candidate in Newtownabbey in 2001 and 2005. She was not suspended until I (myself) notified them that Mary had a mountain of evidence against one of its councillors. She eventually resigned from Sinn Féin in 2010.

The RUC and Social Services were also culpable in allowing Briege to viciously brutalise Mary. As we have written reports of meetings held to discuss my sister’s abuse between both agencies. However, both organisations failed her and it took a full eight months after the initial reports were made by neighbours from Northwick Drive. We, the Court, Public Prosecution Service (PPS), PSNI and a number of Belfast journalists have the names and positions of the ‘Professionals’ who utterly failed ten year-old, Mary as with Sinn Fein’s knowledge about my sister’s horrific beatings at the hands of Briege McLaughlin. Likewise, we also have in our position the names of current and former Sinn Féin members, who instead of making Briege accountable for her criminal mistreatment and cruelty of our sister, fooled the party leadership into believing that Mary’s allegations, were the claims of a disturbed woman. They also fully backed Briege’s rise within Sinn Féin that culminated in her being elected as a party representative on Newtownabbey Council in 2001. Even though, she was never an Irish Republican in the first place.

The Meehan family demand a full and public apology to Mary from Social Services, PSNI and Sinn Féin. Even though, I personally notified the party in 2008 about Mary’s willingness to have Briege charged due to the mountain of evidence in our Mary’s possession.

Without public apologies from the above organisations, my sister will not be able to fully receive justice, nor rebuild her life and that of her four children who also suffered horrible side-effects of Briege’s reign of terror on their loving mother. Mary is not only a victim of a cruel abuser, she is also the daughter of the late Martin Meehan, a Republican who’s selfless sacrifice in pursuit of an Ireland free from foreign occupation.

Enemies Of The Lease Process

32 thoughts on “Briege Of Trust”