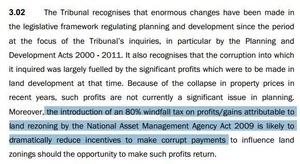 Rezoning plans (top) and an extract from the Moriarty Tribunal Report

“The NAMA Act 2009 as amended by Section 25 of the Finance Act 2010 provided that where land was sold on or after 30 October 2009, and the land in question had been re-zoned since 30 October 2009, then CGT at a rate of 80% applied to any increase in the market value of the land which is attributable to rezoning, which could not be offset against capital losses incurred on the disposal of other assets.

This was known as the Windfall Tax and was applauded by Justice Michael Moriarty in his tribunal findings as a dramatic measure to reduce corruption.

One little-discussed change in Budget 2015 was the repeal of this tax, which had been been strongly and persistently criticised by persons working in the property industry as a serious obstacle to the development of new housing. Although they would say that in circumstances where rezoning and greater capital gains made by developers benefit property professionals generally….

What is clear is that the ‘windfall tax’ has been quietly abolished and the risk of rezoning corruption is back on the table again. The more people who know about this, the better chance we have of preventing such corruption…Thank you.”

10 thoughts on “Return Of The Brown Paper Bags”