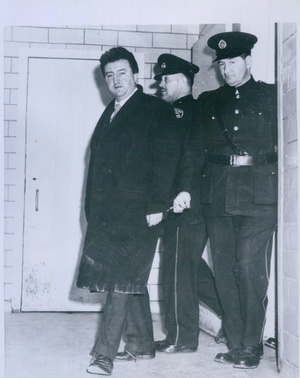 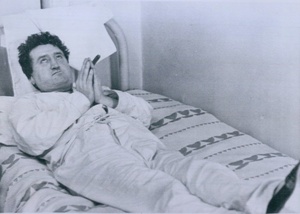 Rare on sale images of Brendan Behan getting arrested and saying his prayers in a Toronto jail  in March 1961.

Behan barrelled into Toronto on Sunday, March 19, 1961, in an unhappy mood. Days earlier, in New York City, he’d been publicly humiliated when he was barred from participating in the city’s annual St. Patrick’s Day Parade over organisers’ fears he’d be an embarrassing nuisance….

…Although Behan and his wife Beatrice were welcomed by the mayor—who awarded Behan a pair of gold cufflinks and playfully warned him to behave himself—it didn’t take long for the city’s pro-British contingent to make them feel unwelcome.. “We knew, of course,” Beatrice recorded in her memoirs, My Life with Brendan (Nash Publishing, 1973), “that there was a strong Orange feeling in the city and that an Irish Republican like Brendan, despite a reputation as a dramatist, wasn’t welcome….”

Historicist: One Drink Too Many, and a Thousand Not Enough (Torontoist)

Hold Your Hour And Have Another