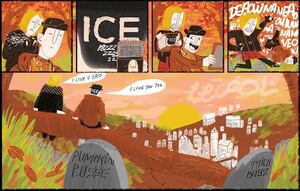 “I wanted to do something Halloweeny so I drew inspiration from the best Halloween-themed film I’ve ever seen (by a long shot), Hocus Pocus (1993). More specifically, the bully characters, Jay and Ice. For anyone who’s not seen the film, they’re these two dudes who hang around in a graveyard, that overlooks the town of Salem, Massachusetts (just them, no one else, just a coupla dudes, hangin out in a graveyard). They’re introduced to the audience in a scene during which they shakedown the film’s cool-new-kid-in-town-ex-city-slicker protagonist, Max Dennison, for his shoes.
I got thinking about these guys and I started wondering what they might do when no one was around. So I figured maybe they do each other’s haircuts (my brother Ben and I had recently given each other a haircut). They come across pretty douchie in the film so I wanted to give the characters an element of goodness and fraternity, and make them a little less one dimensional.(If you haven’t already, please watch Hocus Pocus)…”

A chat with Mica